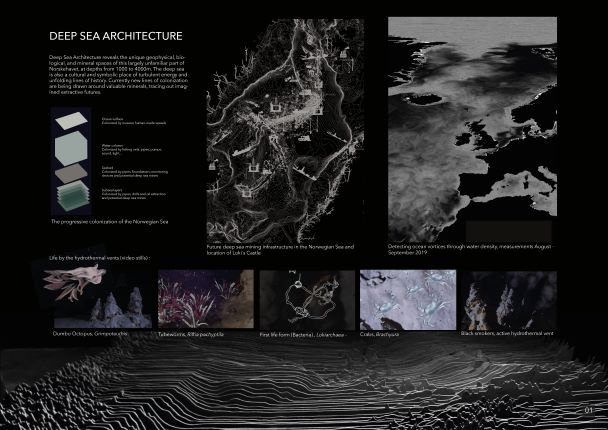 The course Explorations in Ocean Space- Choreography for Norskehavet explores how architecture and design can tackle a complex oceanic environment determined by interrelated forces operating in a radical state of flux. Currents are shifting, fish moving. Despite its unique, largely unknown ecosystems, exploitative deep-sea mining futures for Norskehavet (the Norwegian Ocean) are being forged. Inherited planning methods do not meet the challenge, instead we extend architectural tools to follow ecosystem connections rather than objects, to imagine the perspective of more-than-human protagonists and to tell new ocean stories. Merging artistic research, scientific data, and transdisciplinary dialogue, the projects provide temporal and sensorial access to Norskehavet’s critical spaces.

The ocean is a crucial site where we must address changing ways of placemaking in a gloablised planet. The world ocean is exploited, colonised, divided and commodified- a fluid Terra. It is hyperspatial; deep, layered, volumetric, and kinetic. The degraded ecological condition of the world ocean has so far not improved through techno-scientific approaches to ocean management. Holistic, imaginative and critical architectures are required that disseminate knowledge, stimulate emotion, and describe potential new human-oceanic relations. The student work pushes the inherited boundaries of architecture to embrace this challenge, exploiting the communicative force of sound, image, text and materials.

The evolution of Norskehavet is explored through a series of mythical stories, eventually envisioning the contemporary myth of the future. Comparing ocean mythology across the Indian and Norwegian cultures reveals similar figures and narratives; all-present tensions and balance between beneficial and destructive forces, and escalating greed resulting in destruction. Myths are intertwined in a narrated video advancing through the past, present and future, illustrated through elaborate maps and a series of tarot cards, which interpret the different mythological figures. Overexploitation of the ocean has persisted through the myth of infinite resources, oil and gas represent the myth of industrial growth. Steel and concrete monsters inhabit Norskehavet and new organic/mineral mutations are evolving unnoticed, set to inhabit a dystopian future.

“Our tropical brothers and sisters are dying. Soon it will be our turn… “
Representatives of The Coral Nation– an imagined new political entity– address the United Nations General Assembly, pleading for survival and the discontinuation of Humanity’s destructive activities in the ocean. Through a series of speeches, this audio/video piece presents the case of the corals, articulating their vital importance to marine ecosystems. Coral reefs are the machinery that keeps oceans overflowing with life and power. Approximately 25% of all marine life depend on coral reefs to survive, and 0.5 billion humans depend on coral reef-connected ecosystems for food. All citizens have equal rights, privileges and value in these complex megacities of the deep- the 297km2 Røst Reef covers 3x the city of Bergen.

Seabird populations are rapidly decreasing around the Norwegian Sea. Through the phenomenological approach of listening, this project seeks to create a connection between humans and seabirds in their natural habitat, aiming to preserve the vulnerable soundscapes of wild coastal places. Using drawings and recordings, the video documents the investigation of geophonies and biophonies at Runde, an island in the south of the Norwegian Sea, and the proposed transformation of an abandoned lighthouse building in an acoustic space. The new space mediates and amplifies the natural soundscape. It is a place for nature to tell and humans to listen. The changing land- and soundscape is shaped by wind, water and seabirds throughout the seasons, transferring the cultural and biological history of the island.

A space-specific audio/video walk that critically speculates on the acoustic conditions of salmon and the current state of salmon farming in Norway. In the walk, inspired by the work of Janet Cardiff, participants are visually and aurally guided through space with the help of phones and headphones. From their phonescreens, participants follow a series of pre-recorded events that lead and navigate them through the experience of a migrating wild salmon swimming through the space. They are part of the salmon’s journey starting from the river, swimming down the fjord, entering to the open sea and ending back to the river. A double reality is created, where the fictional world of the film blends with the reality of the architecture and body in motion.

– accepted for the “Visionaries” exhibition at Culturgest, Lisbon

The deep sea contains 97% of the space available for life on Earth; dark, unfamiliar, full of secrets, “the ultimate reservoir from which life everywhere draws sustenance” (Ballard). The deep Norskehavet seascape is constructed along the Mid- Atlantic Ridge, producing hydrothermic vents that are home to unique life-forms, complex chemical interactions, and unpredictable oceanic forces. Historically full of mythological creatures, its uncertain future is sketched out in mining ambitions and slowing planetary currents. Deep Sea Architecture reveals the geophysical, biological, and mineral spaces of this largely unfamiliar part of Norskehavet, aiming to restate its contemporary cultural and political significance. Deep Sea Architecture is presented through two installations conveying the contrasting realities of ancient, unique ocean formations as a new exploitable resource and the deep ocean as a cultural and symbolic space. It comprises an abandoned dinner party and a tray of oil, swirling under a timeless projection of ocean vortexes. Both installations convey a dystopic atmosphere, disorientation, and a feeling of deep uncertainty. The visitor is transported into an unknown world, where displaced consumable materials overlay future traces of human colonisation and ritual.

Inspired by the irony of industry speeches at a deep-sea mining conference dinner, the installation brings the deep sea close to human experience through spatial, audio and visual means. An architecture that Includes the largest geological feature on earth and its unique inhabitants – still largely unknown, and also the exposes one of the last frontiers of planetary extraction. Hydrothermal vents take minerals from magma, bringing them into the ocean as they smoke, then eventually falling as sediments onto the sea floor. Meanwhile the manganese crust is forming at a rate of few millimeters per million years. These sediments and crust are being discussed as our new oil, the next chapter of Norway’s financial odyssey. In July 2021, the Norwegian oil fund surpassed 12.000 billion kroners for the first time. Deep-sea minerals are being explored with oil technology under the pretext of meeting green energy demands, with the potential destruction of unresearched deep ocean ecosystems as a result. The appropriation and consumption associated with deepsea mining in the Norwegian Sea are interpreted through an abandoned future dinner party. The sound-track is still rolling- enthusiastic speeches of unimaginable profits overlaid by deep-sea sounds. A magnified view shows strangely coloured creatures, glowing minerals and smoking vents – we are deep under the sea– where we do not belong.

Sea of the Mind (Øystein Larssen)

Coherent mesoscale oceanic eddies live only days or months, but the Lofoten vortex is uniquely persistent and long-lived. It slows the Norwegian Atlantic Current down,trapping the hot water masses moving north, resulting in better nutrient distribution and rich production along the Lofoten basin. Increased water temperature on a global scale may slow down the current circulation system, disturbing the Lofoten vortex’s vital life-giving role. With the twirling motion between two opposing currents as a point of departure, we follow one of the protagonists of the oceanic vortices- Carbon. Together with warm water and salt, carbon particles from non-sinking organic materials get caught up in these unpredictable and temporarily closed circular flows and dragged to the deep ocean, where they follow the underwater channels for hundreds of years. But what happens afterwards? Guided by the notion of magic rather than tectonics, the viewer enters a cosmic world that imagines the life cycle of carbon, at once primordial and post-human. Following the chaotic and diffusive nature of turbulent flow, the particle moves through a space that disintegrates and reconfigures into different symbolic forms in an attempt to reflect on our past, present and future. 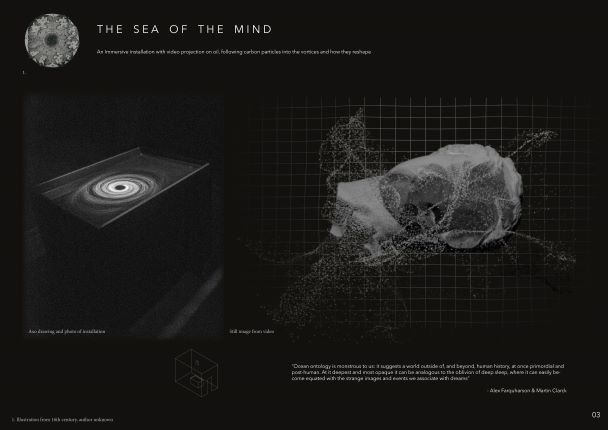 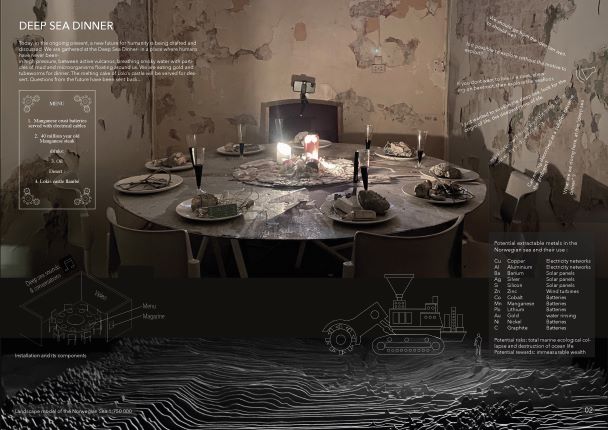 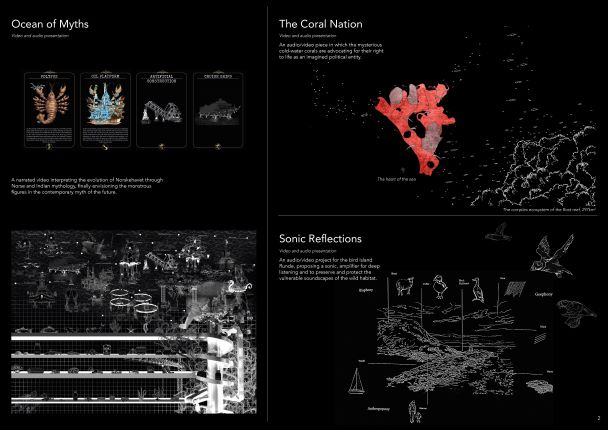 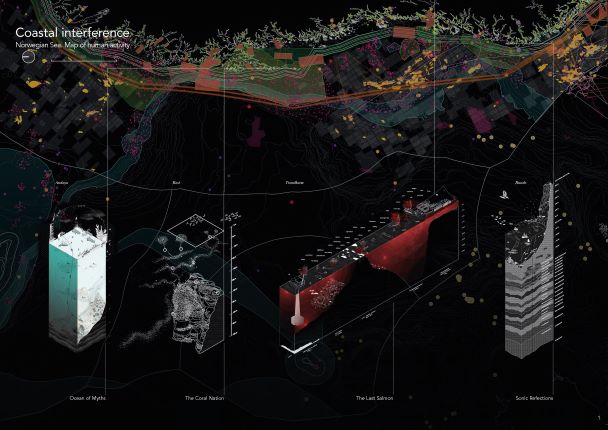 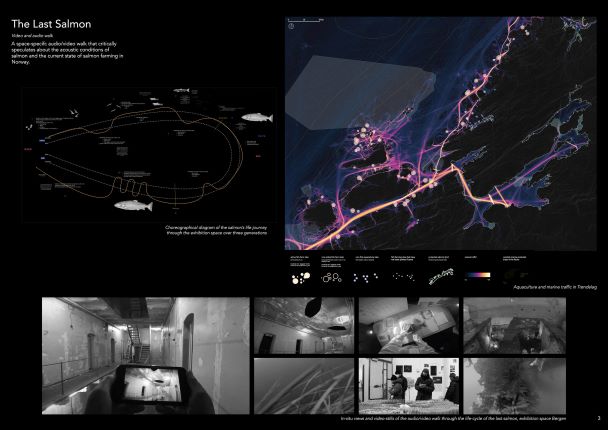 Kierulf and Larsen are the winners

On 25. January Statsbygg represented by deputy director Hege Eeg, handed out their Student Award 2022 to the winners Katarina Kierulf and Alvar Ekhougen Larsen for their joint project  “Raw Earth. Exploring the possibilities of clay as a social and material binder”. The winning project receives a prize of NOK 20.000,-. «Statsbygg wishes to encourage […]