A CONSTRUCT FOR SOFT POLICING WITHIN AN URBAN VISION

I wanted to understand the police as a living organ in our communities, questioning its way of interacting with the anatomy of the city. This by understanding how the citizens and police interact, connect and communicate with each other to secure and reduce the possible threshold between. I observed that many police buildings may be characterized by an absence of accessibility and presence within the urban context.

With this project I wish to facilitate an urban integration of a local police contact in Slettebakken- Bergen. Located in a collaborative environment with other social actors of importance, as an instrument of welfare. This to specifically work with preventive measures directed towards the needs and care of the local community. I am therefore endeavouring to create new spatial patterns for communication between people. By attracting the local population to a multi-functional public space and bringing together diverse sections of society, the aim is to create a sense of tolerance, awareness, identity and mutual respect. In this context I believe the presence of the police as participants on an equal level to other sections of society will humanize the urban space. Patterns of communication between police and the public may be found within principles of humanizing and softening the urban space, shaping environments for human connections, conversations and invitation to interaction.

My project works somewhere between classical building design and urban ideas, focusing on spaces between meetings and movements of people within public spaces.

By designing an urban village comprising of several everyday programs including a police contact. In a specific location and in dialogue with the community and the surrounding landscape, I want to break boundaries and thresholds in communication and interaction with the public. I believe dissolving structural ideas of “ordinary” police buildings, and integrating them into the cultural core of the community, may humanize police presence within our society. I believe a humanization of the police is based on the police’s ability to be more accessible, accommodating and to show understanding and empathy for the daily problems of the public. Soft policing might be found with principles of spatial arrangement of accessibility, spaces for communication and the creation of urban activity. To achieve soft policing, I believe that the police work needs to be more focused on a consulting position, solve problems at the lowest level where coercion and consequence are the last choice of result.

My ambition by integrating the police with different collaborating partners such as child welfare, social workers, municipalities, sport clubs, etc, is to create an environment that works purposefully, at an earlier stage, with actions that are proportional to the issues ahead and carried out with the appropriate expertise. With a multidisciplinary environment, better results may be achieved with less intervention. The collaboration may dissolve possible barriers, improve closer connection with the local community, and ensure good local knowledge to strengthen the service performance.

Rather than following the traditional methods of police work, the project proposes new platforms for collaboration, conversation and information, in a contrast to the existing generic architecture of police institutions. The co-location of the police with other collaborating partners and in dialog with the community seems to be a decisive factor in ensuring accessibility. I want to shape spaces that are capable of supporting and adapting to the many progressive reforms of safeguarding the local community, introducing a different typology in contrast to traditional programming of police services and location. 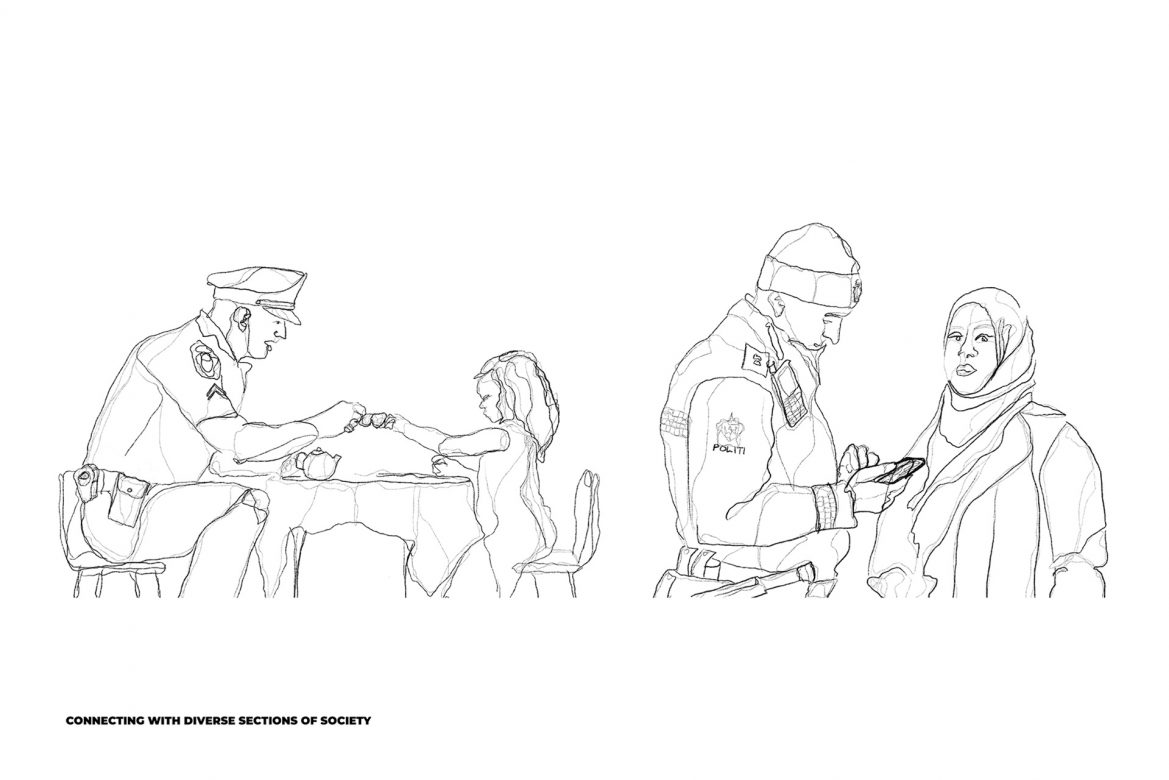 Preventive work is handling complex aspects of social issues and includes all sections of the population. This is based on continuous effort to connect and communicate with the local community. 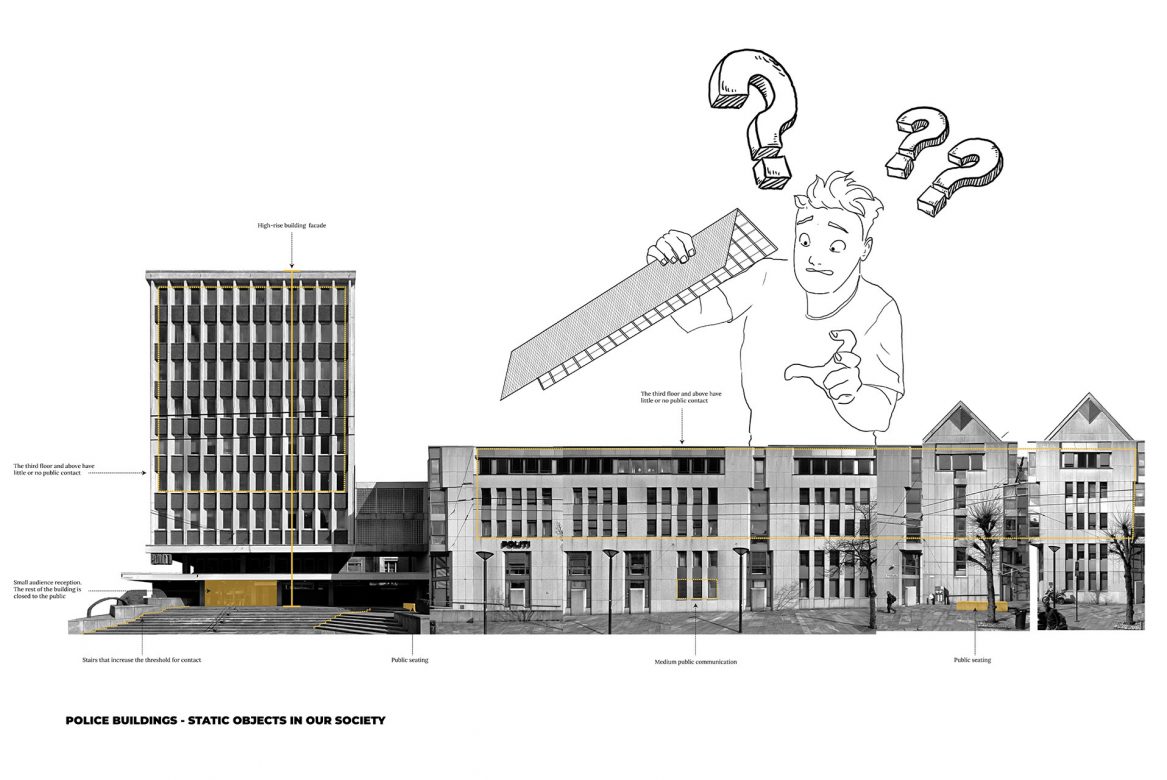 As a general observation, several police buildings in the West Police District have a lack of public connection and accessibility. Many of the stations have an overall closed facade or little visible communication of inside activities and services, which may shape a distance between the police and the public. 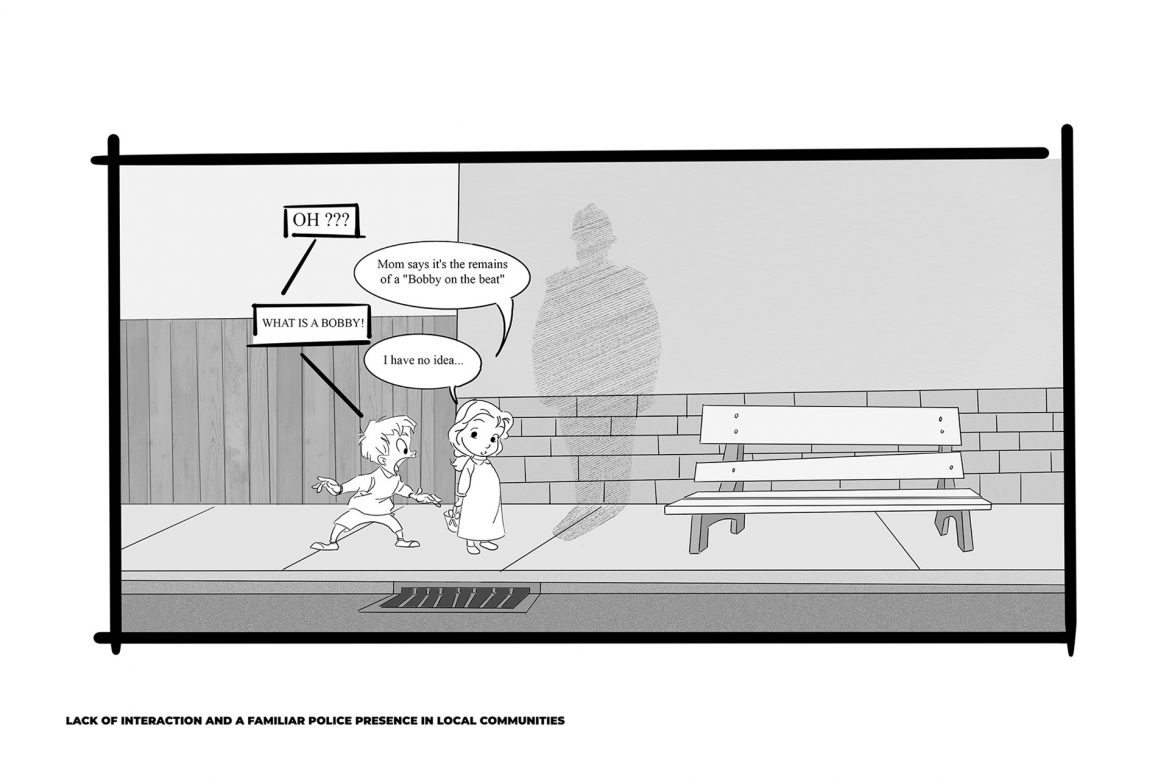 The illustration stands as a joke against a police who have disappeared from the neighborhood, creating a lack of contact, communication and interaction between the public and the police. 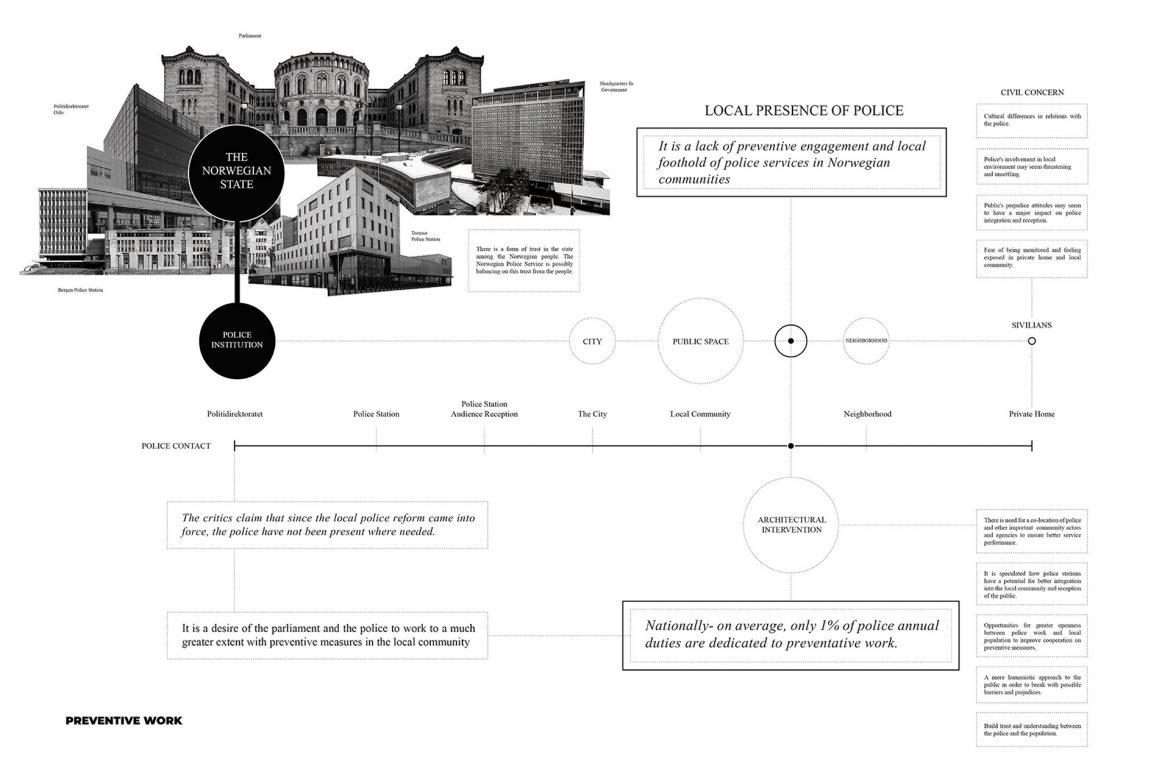 The map shows the social structure where I want to arrange for a local police contact and where I believe preventive work should start. This part of the police service is inadequate, and by integrating a small scale police contact within the local community, it may create a greater opportunity to prevent social challenges before they escalate to more severe situations 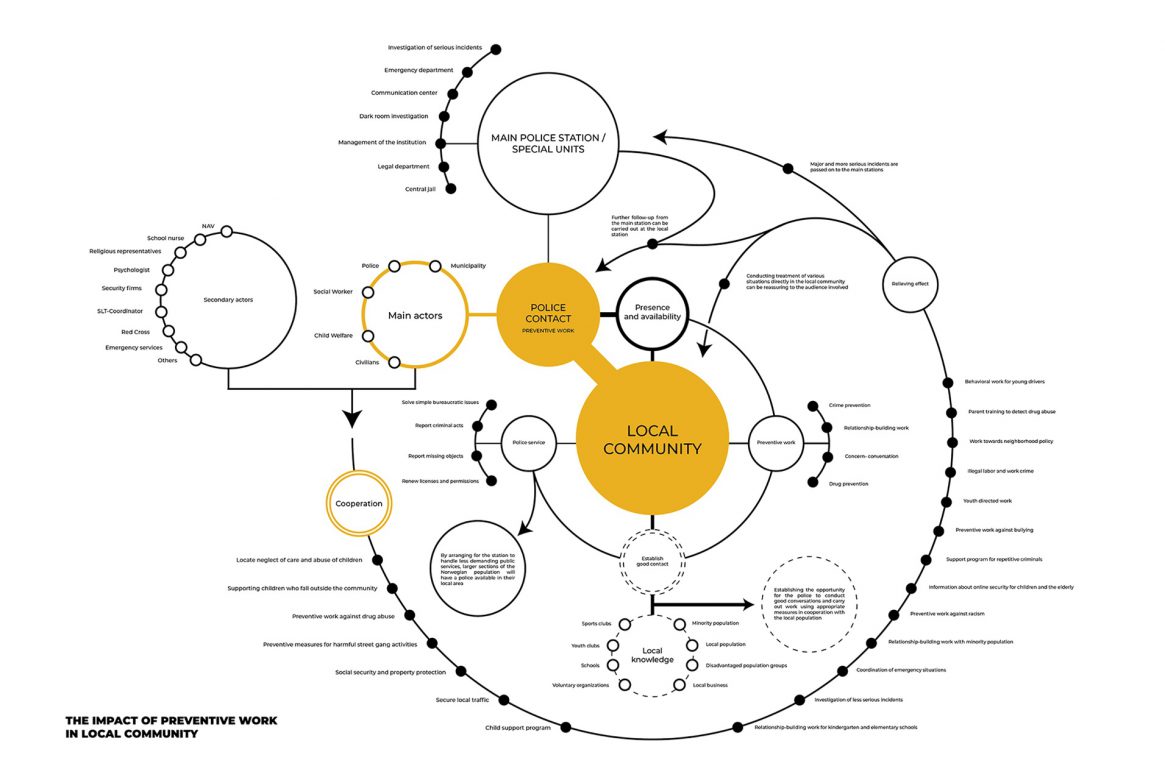 My vision of programming police service in cooperation and interaction with other community actors and the local population, might be the key to make a change. The local police contact is intended to have a relieving effect on the main police station in tasks of preventive nature. 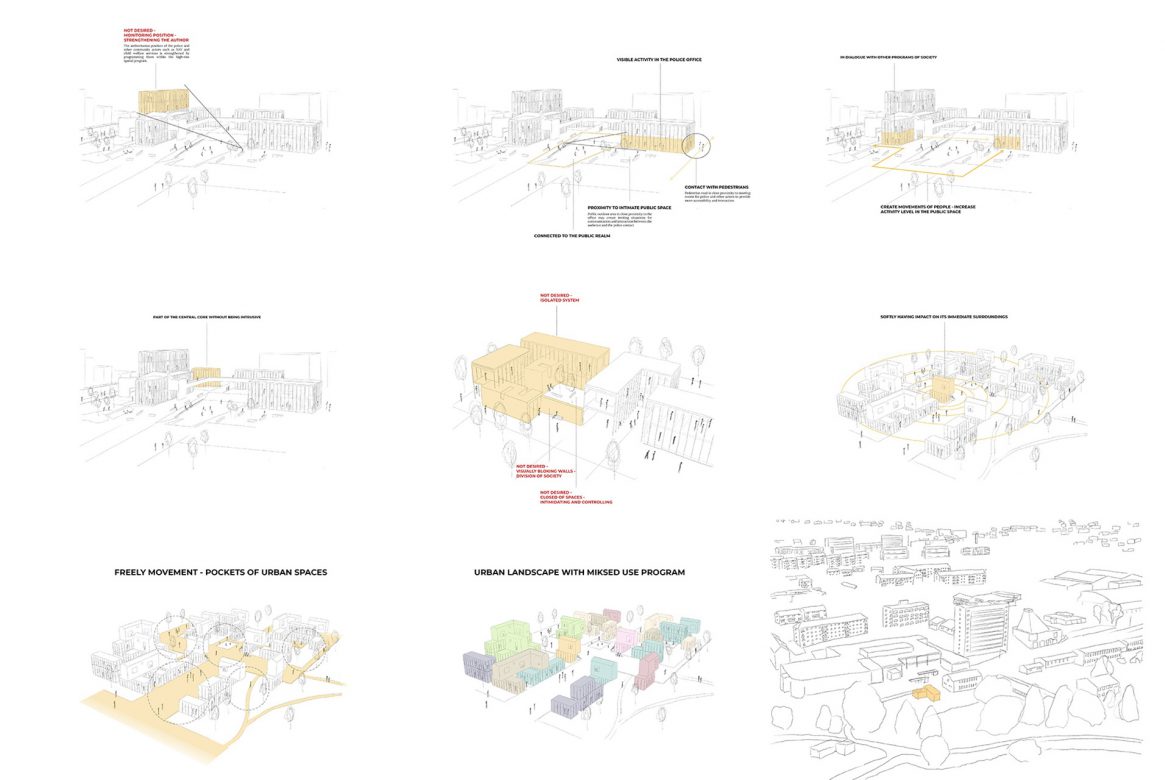 Analysis of various constructions of police presence, accessibility, communication, movement, visibility, etc. within the public realm and in a dialogue with the urban context 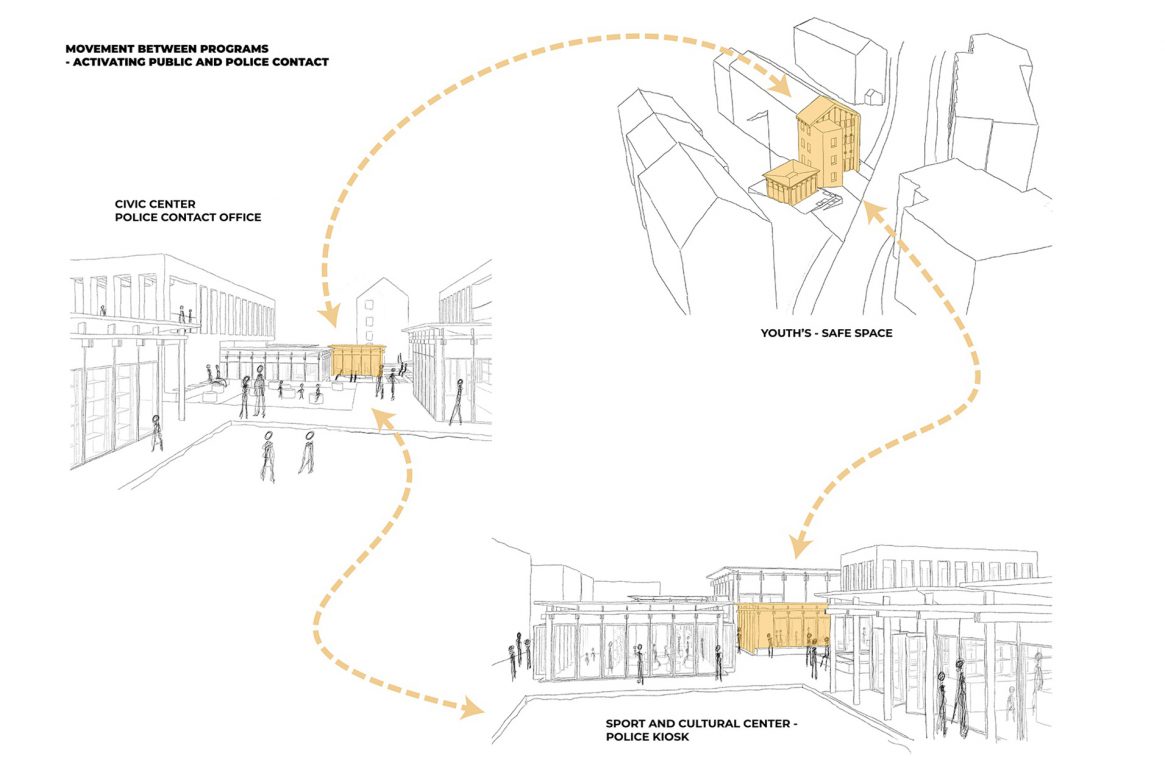 Addition of 3 locations within Slettebakken community for broader police contact and interaction. Moving the local population and the police between public programs. 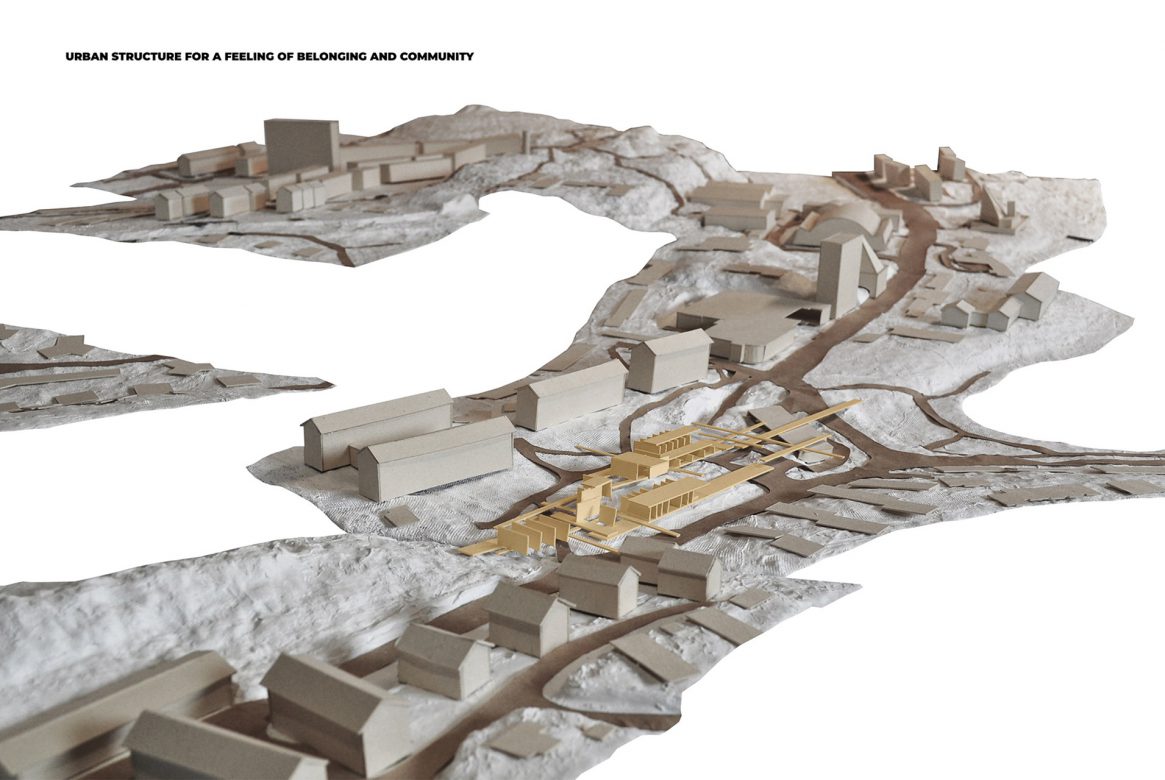 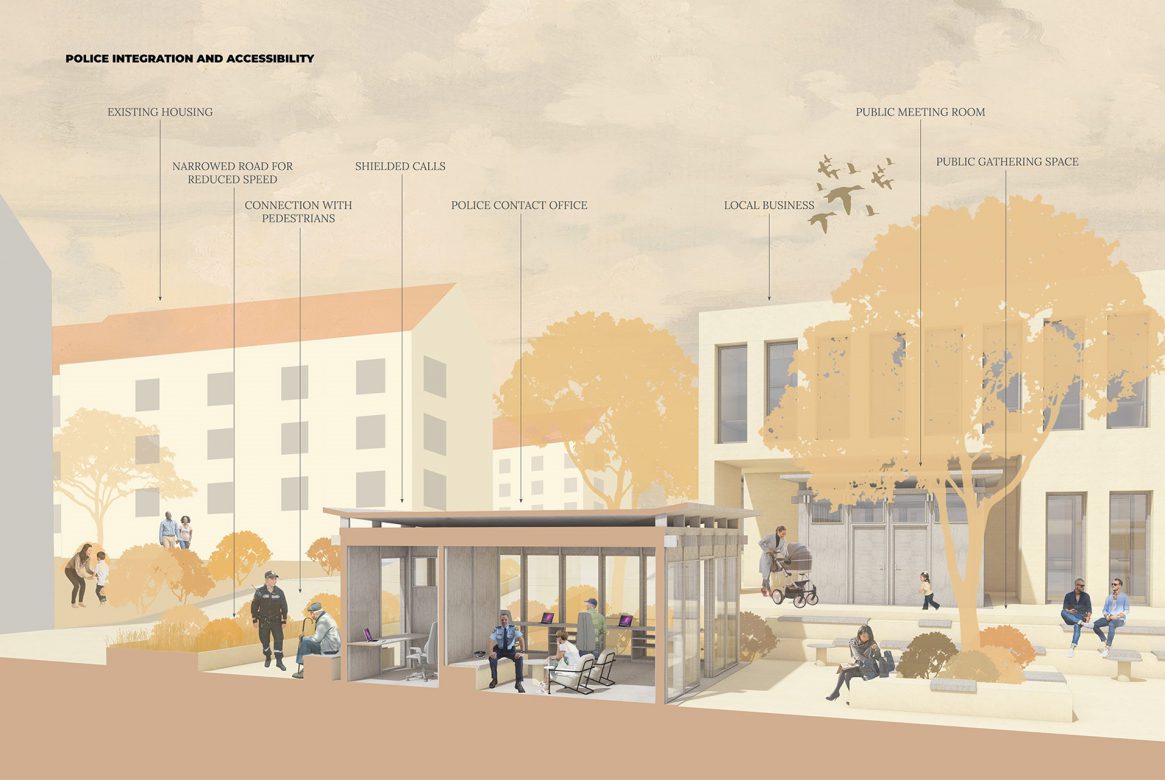 To change the ideas of authority controlling our society, the police contact office is located on the ground floor with a transparent connection to the public spaces. This to encourage a lower threshold to initiate contact and interaction. 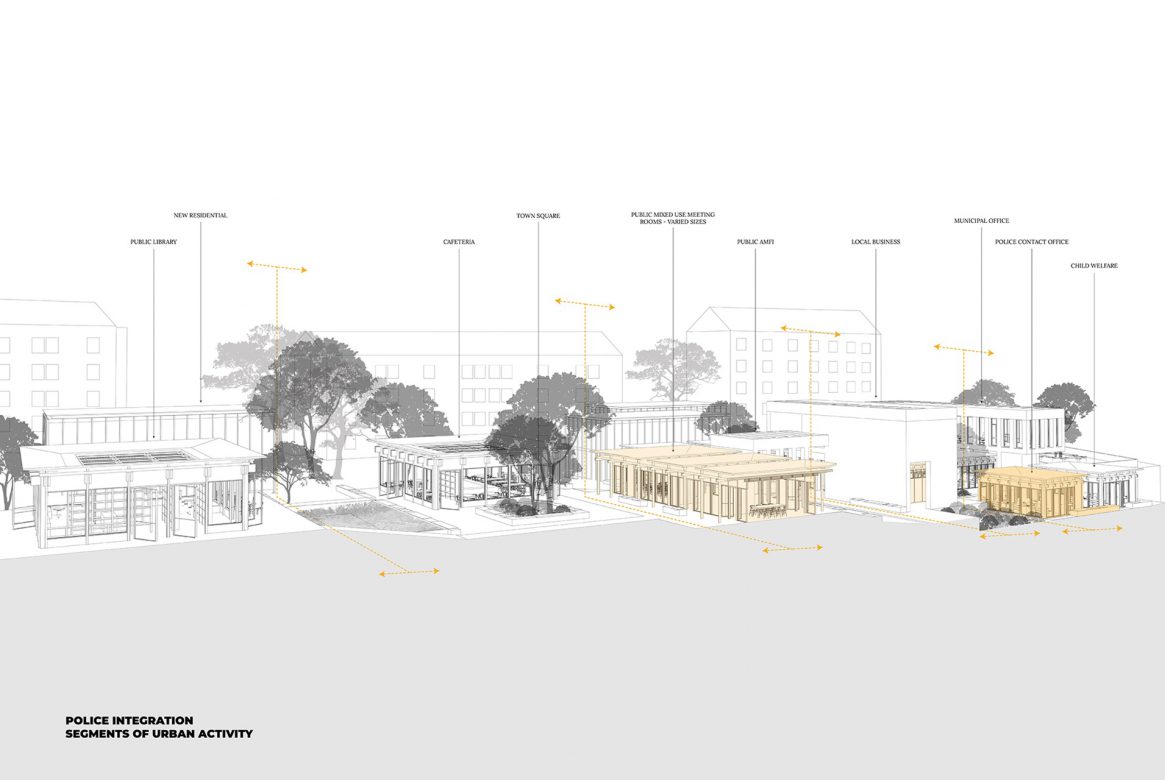 The police contact is sharing mixed-use spaces and programs with the local community. Enhancing accessibility for larger sections of the population and becoming a contributing part of the community. 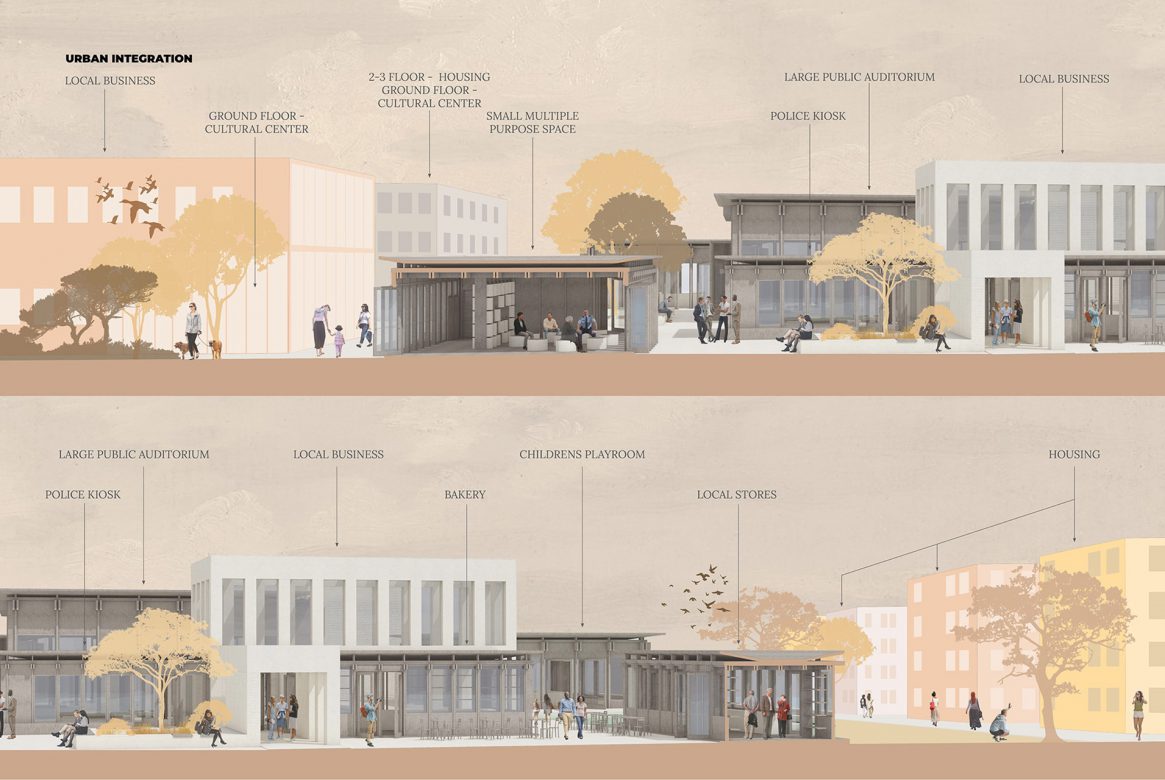 Preventive work requires a certain presence within the urban context, with a level of activity that includes encounters with a wide range of the population. The project aims to construct multi-functional public space enhancing communication and interaction.
Dokumenter