The Island of (in)stability

Most of my artistic work is situational. I work mostly with light, - light touching, form and space. This has resulted in a number of «light installations» interior and exterior. I work mainly with site based ideas; content and character.
Materials are chosen according to the idea and in relation to the site.My choice of materials is unlimited;anything from traditional materials to building- or natural materials.
The light can be natural or a variety of artificial light.
The situations can be either small or large but always with one or another form of energy.My main focus is on relativity of space/form/light with a versatility.
Light and space relativity is common to all my works.
I am fascinated by light, yet not necessarily limited to the colour white whenever the situation requires something else.

-or a hotel for visiting foreigners in the middle of town

What do you imagine when you hear the term refugee camp? 20 years is the average amount of time a refugee spends in one of UNHCRs refugee camps. In Shatila, a Palestinian refugee camp established outside Beirut in 1948 and one of the world’s oldest refugee camps, a fourth generation of refugees are now growing up within a state of exception, their lives on hold from birth as the international community look for solutions.

Except human lives are never on hold. Time passes, lives unfold, and experiences are lived. Rows of tents become concrete towers filled with homes. The temporality embodied in the term camp, prevents us from recognizing the placemaking that happens when humans live their life in a physical environment. The stories and systems propagated by journalists, NGOs, UN agencies tell a story of constant crisis, one that robs people of dignity, and leads to an endless cycle of either failing or inefficient aid development projects.

Because it is so centrally located in the city that functions as the hub for western foreign correspondence, aid and diplomacy for the middle east, Shatila has become the poster child of the refugee crisis. In the constant reproduction as the backdrop for stories of misery and desperation there is no space for the portrayal of a complex urban area that in certain respects can be said to function as Beirut’s actual centre.

This project engages in an architectural anthropology, explores the logic of its built environment, attempts to map and draw the spaces created by the population of Shatila over the past 70 years seriously, as well as analyses its place within the city. Furthermore, the project try to critically explore the relationship of outside NGOs, researchers and audiences have to urban development of the camp.

I am proposing a hotel on the site of a defunct water tower, another international aid project to that failed because of poor knowledge of local context. The hotel will be a United Nations – private sector joint venture, attempting to bypass the dysfunctional and gridlocked politics, in an attempt to revive the failed project. The hotel will host the international aid workers, journalists, researchers, language students, political sympathisers and so on. Needing water, the hotel will run the pumps and desalination systems already installed in the water tower, and as a by product will provide water to the rest of the refugee camp too.

Constructed using local techniques and labour, by buying services from businesses in the camp and selling a highly refined product that invites the visitors to leave as much money as possible inside the camp ecosystem, the hotel promises a new form of sustainable market driven development.

Hotels are sites with complex geopolitical functions; Islands that provide a sense of normality during war, neutral ground in which to meet, spaces for both transparent and shady transactions, as well as sites for neutral leisure and containers for projecting dreams. Tourism is a popular, but also very controversial tool for development as there is a whole set of issues that comes with it. The architecture of the hotel becomes a model of the camp, its relationship to the outside, and a to question the ethical practices of aid work. 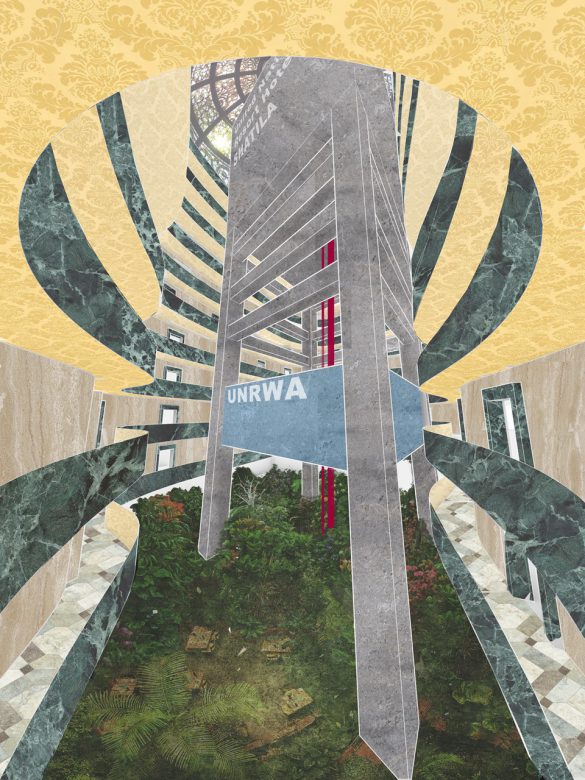 Conceptual sketch of how a luxury hotel for diplomats and UN workers might look like, built around the defunct water tower. 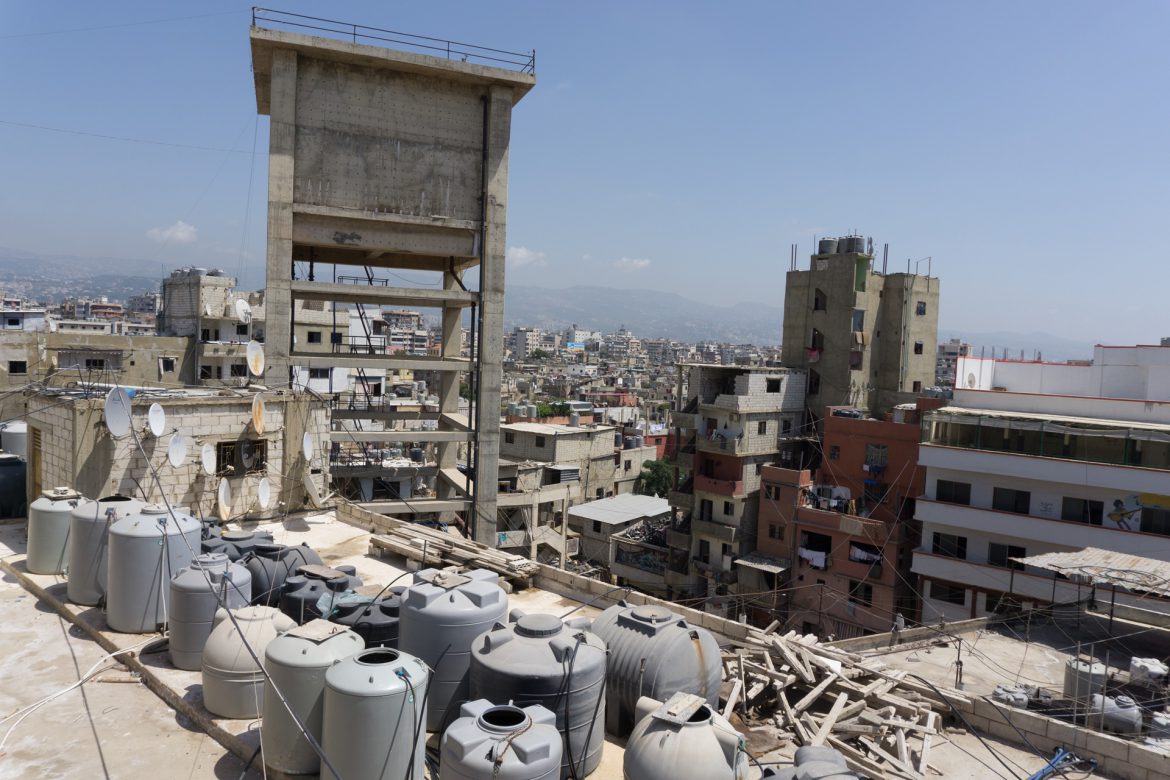 The Shatila water tower. Designed to provide the camp with fresh water but not in use due poor planning and management. 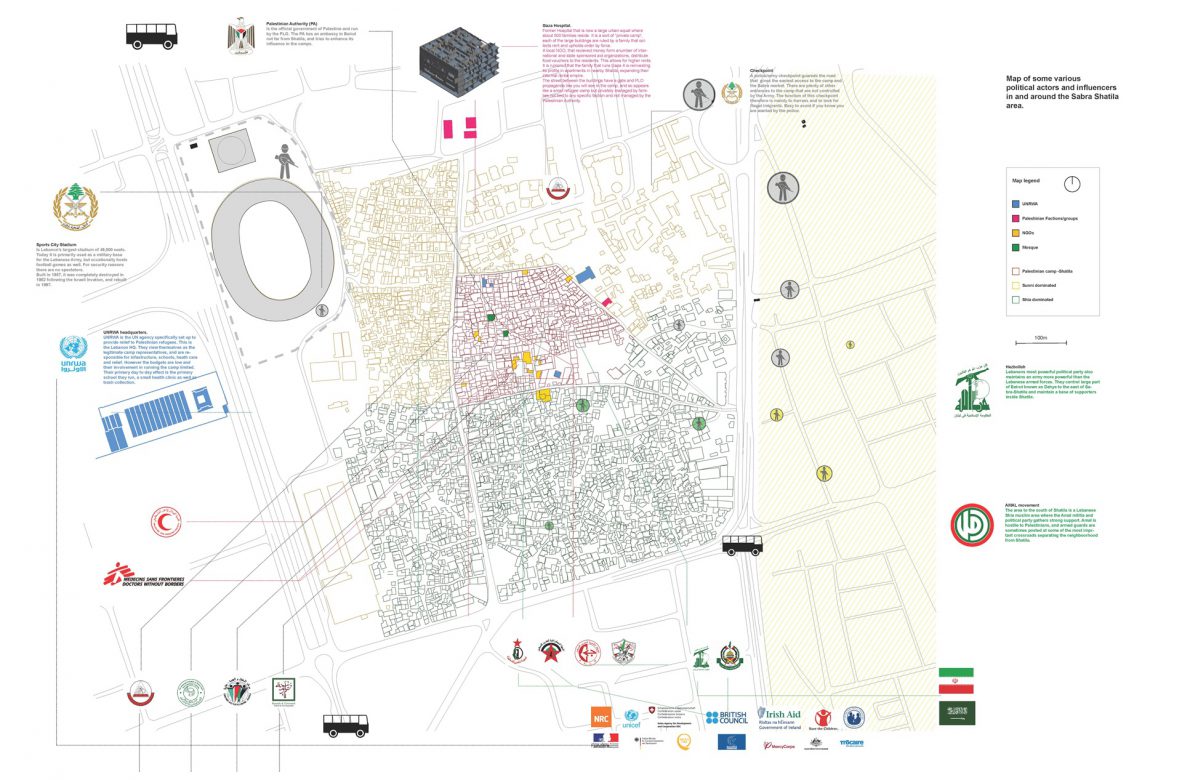 A map of Shatila and the immediate surrounding area, with an attempt at mapping the various political sovereigns contributing to the highly contested political situation

The hotel provides several other amenities to the camp residents, such as this pool with a 360 view of Beirut. Allowing residents of the crowded camp a chance to have calmer sensory experiences as well as a place to take selfies. 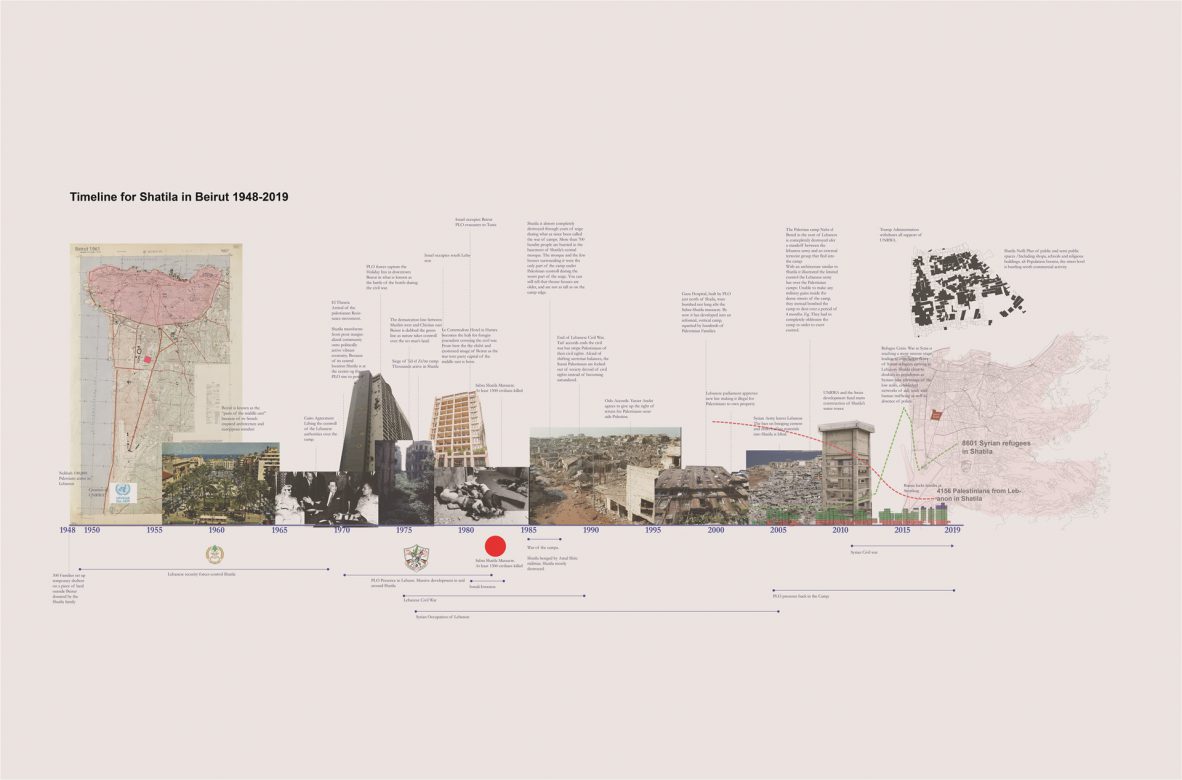 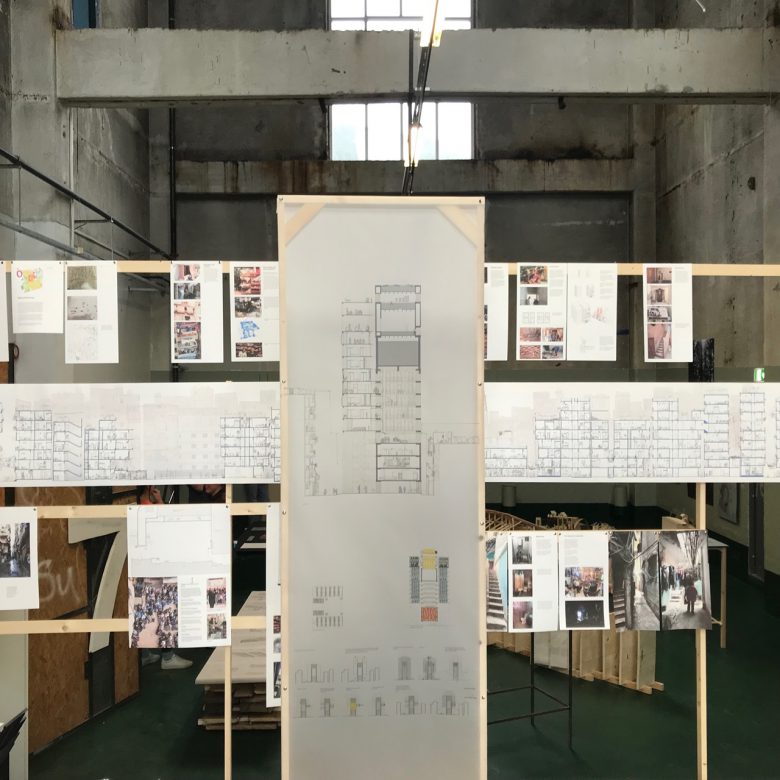 A section drawing of the final hotel design, with the section of Shatila in the background. 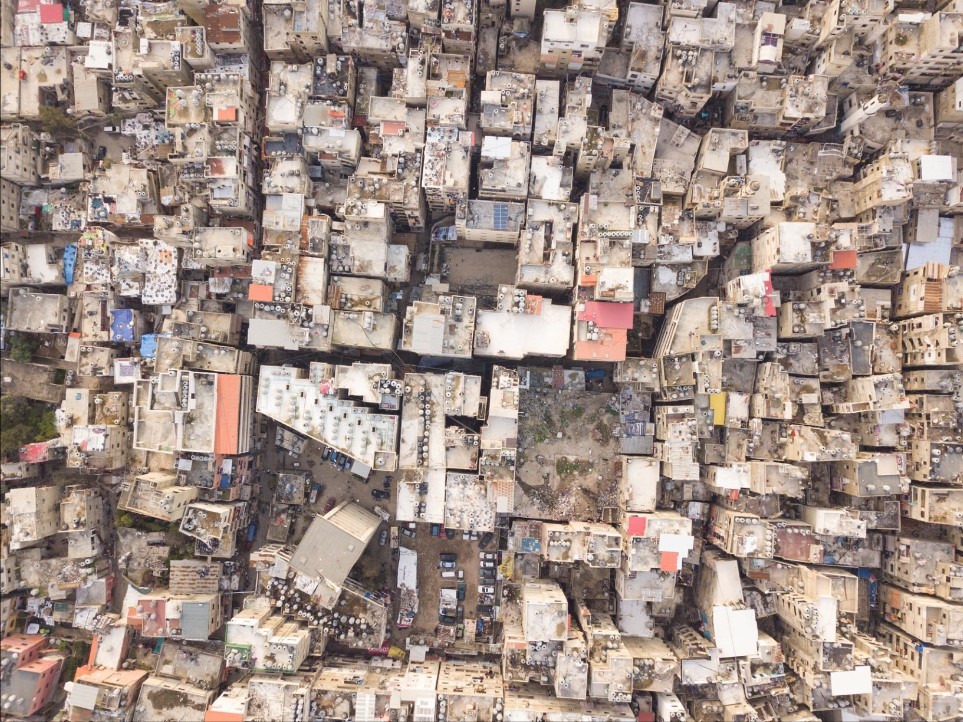 Shatila as seen from above.
Dokumenter