Vibeke Jensen (Berlin, DE/ Trondheim, NO) received her Master in Architecture from NTH Trondheim (NTNU), with exchange to AHO. She did 3 years of graduate studies at the Architectural Association in London and received her AA Graduate Design Diploma in 1992. Between 1992 and 2015 Jensen was based in New York practicing as an international artist in Belgium, Norway, NY, Beijing, Shanghai, Bogota, Trieste, Salzburg and Mexico City, with exhibitions in museums and galleries, projects and commissions in public space, and artist residencies. Her work is situated within a Critical Spatial Practice. She has taught master courses and workshops at BAS, AHO, NTNU, KHIB, Oslo Architecture Triennale, and presented her work at international schools and conferences (Universität für angewandte Kunst, Wien; Scandinavia House, New York; Zurich University of the Arts; Metropolis Laboratorium, Copenhagen). She is currently guest professor at Bergen School of Architecture where she tutors diploma students and engages in Master Courses.

Christof Mayer (* 1967) studied architecture in Berlin and London. He graduated 1998 at the Technical University of Berlin. In 1999 together with Andrea Hofmann, Jan Liesegang and Markus Bader he founded the architecure collective raumlaborberlin. In 2000 he became member at the Chamber of Architects Berlin and started Büro für Architektur und Städtebau. Christof Mayer has been teaching at the Berlin Weissensee School of Art, the Bauhaus Dessau,  the Bergen Architecture School and the Hochschule für Gestaltung und Kunst in Basel.  2014 he hold a residency at the Monash University in Melbourne.

-Restoring social cohesion by adding a fourth-place into Solheim Nord
Solheim Nord (as follows Solheim) is southwest of Bergen city center, along Løvstakken’s (477 m.a.s.l.) east side – stretching from fjord to mountain. This has been a working-class area centered around the shipping industry for many decades.
The area consists of low-income high-rise buildings along Løvstakkens mountainside, working-class 20th century townhouses (in the middle), followed by modern, high-income, six story buildings by the waterfront

My urban study shows a diverse city, but certain areas are neglected and forgotten.
Solheim is one of these and scores as one of the top three statistical units in the city center, among the lowest according to the survey on living conditions (Folkehelseoversikt Bergen Kommune 2019). The area has seen a rapid transformation over the years, with no natural meeting places. Most industrial buildings have been replaced with modern housing complexes. Gated marinas and kitchen-living rooms facing the quay make the area less open.
The municipality of Bergen has, through regulations, demanded that ground floors must contain public functions. However, most ground floors are still vacant. Furthermore, most housing complexes have entrances on other levels due to the regulation, leaving the street (Damsgårdveien) empty. The area is left with a missing identity and synergy. There is no mutual meeting ground. Apart from Løvstakken – which is a popular hiking path, the area also lacks activated green spots. The steeply sloped landscape causes less accessibility for people in the area with reduced mobility.

I have chosen to work with Kavlifabrikken (Solheimsviken), situated at Damsgårveien 59, right next to the pedestrian bridge “Småpudden,” which connects it to the highly activated neighborhood Møhlenpris. There have been meaningful discussions about the future of the building in recent years. Many want the building to be a cultural meeting place. Some of the users of the building today are “BAKOM;” a meeting place for young filmmakers and game developers, a motorcycle workshop, an inventor, artist ateliers, and architects.
BOB – Bergen & Omegn Boligbyggelag, which has also been one of the area’s leading developers, owns the building and will add two new floors with apartments on top of the existing factory building with 18 new residential units and refurbish the three existing/ original floors. I have created a counter-proposal that takes human values and unity into account.
Ray Oldenburg, an American urban sociologist, introduced the term “third places” to describe our cities. The “first place,” as he describes it, is our home; the “second place” is our educational institutions and workplace. In contrast, “third places” are environments (neutral zones) such as parks, cafes, public libraries, and bookstores. Oldenburg argues that third places are essential for civil society, democracy, civic engagement, and establishing a sense of place. While first and second places are already well established in Solheim, the area lacks uniting public places.
For my diploma thesis, I have investigated how we can introduce a “fourth place” – a combination of the “three,” into the existing factory building Kavlifabrikken. The “fourth place” will operate as an extension of the adjacent kitchen – not to replace but supplement it. The “fourth place” also includes environmental learning through practice and adds new jobs related to food to the area.
Kavlifabrikken is envisioned to benefit the greater good of Solheim – raising the standard of living for everyone. My proposal is that Kavlifabrikken is given to the people of Solheim;The factory building, which historically relates to food, will continue to do so. This way, it becomes an extension of the adjacent residences – yet a fully public social platform intended to serve the whole area.
As an exploratory step in the process, I have studied how vegetables can become architecture. Both analog and digital tools have been part of the process, sometimes combined. I have focused on variation, visual character, and structural tectonic to interpret and simplify the organic structure into architectural elements.
“Synergic Lift” is about creating suitable spaces and activities for different cultures and personalities to meet and learn from each other. In addition, the project aims to turn the old factory into a center for food and urban cultivation. People will participate in a fully public roofed “allenning,” shared kitchens of a different character, a learning and educational program based on learning through practice, an urban greenhouse, and an Asian-inspired water garden. The added vertical circulation will enable people to join the public rooftop garden, which adds views, colors, textures, tastes, smells, and new life to the area. 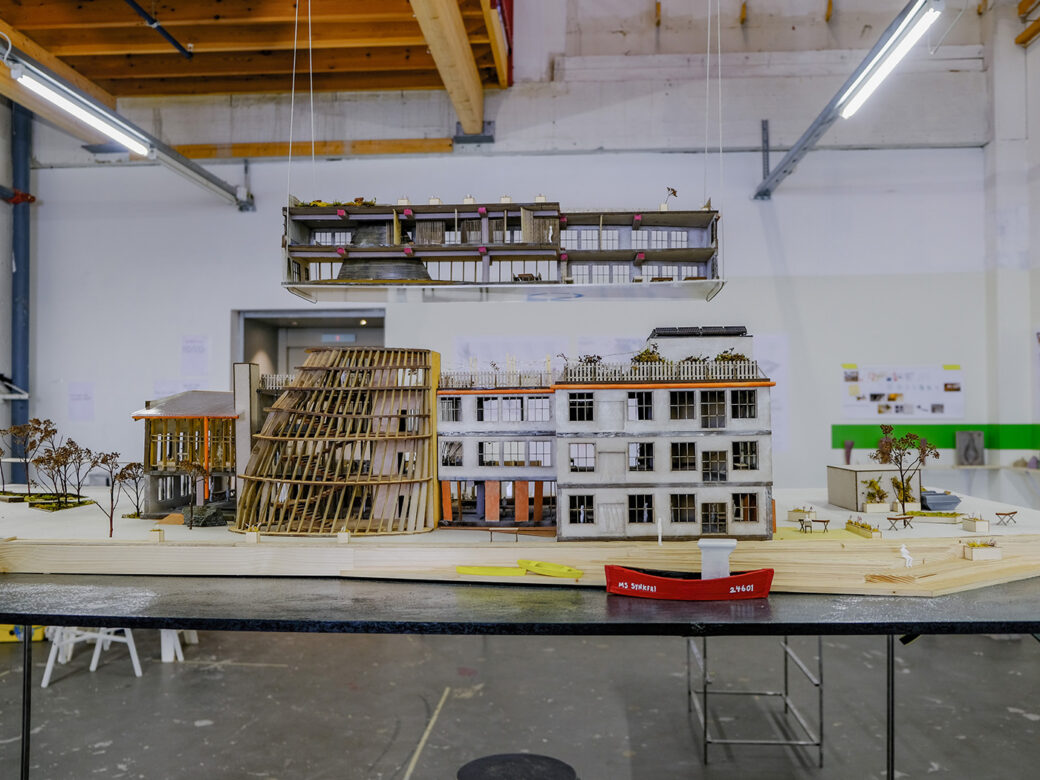 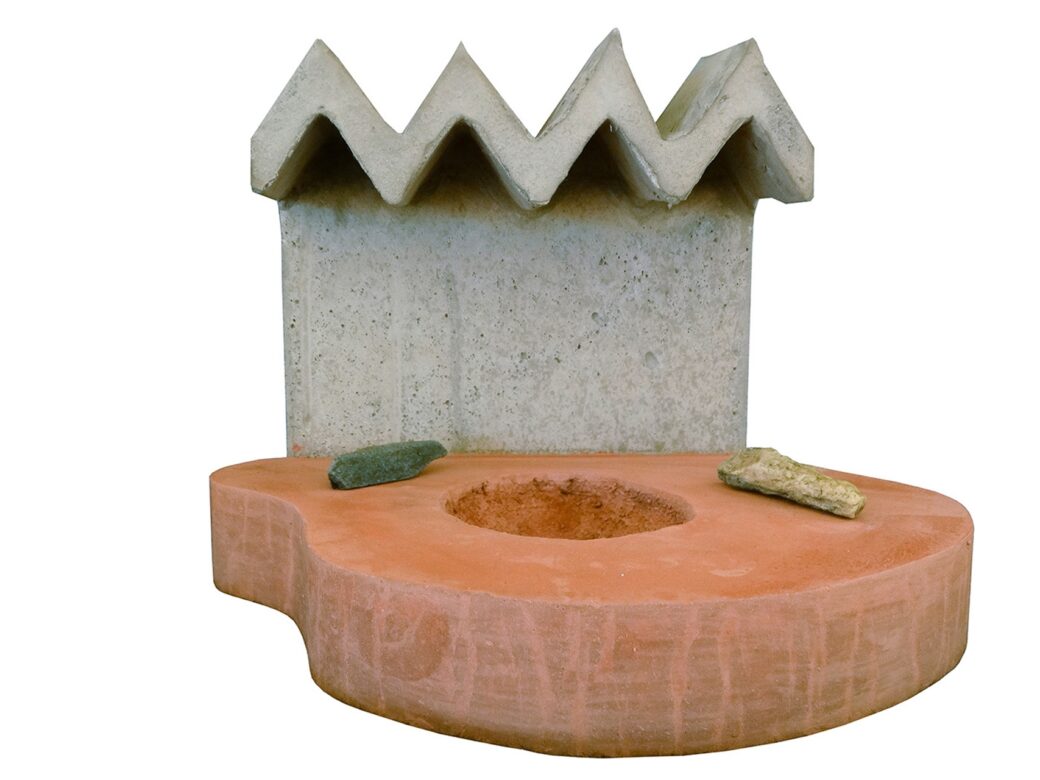 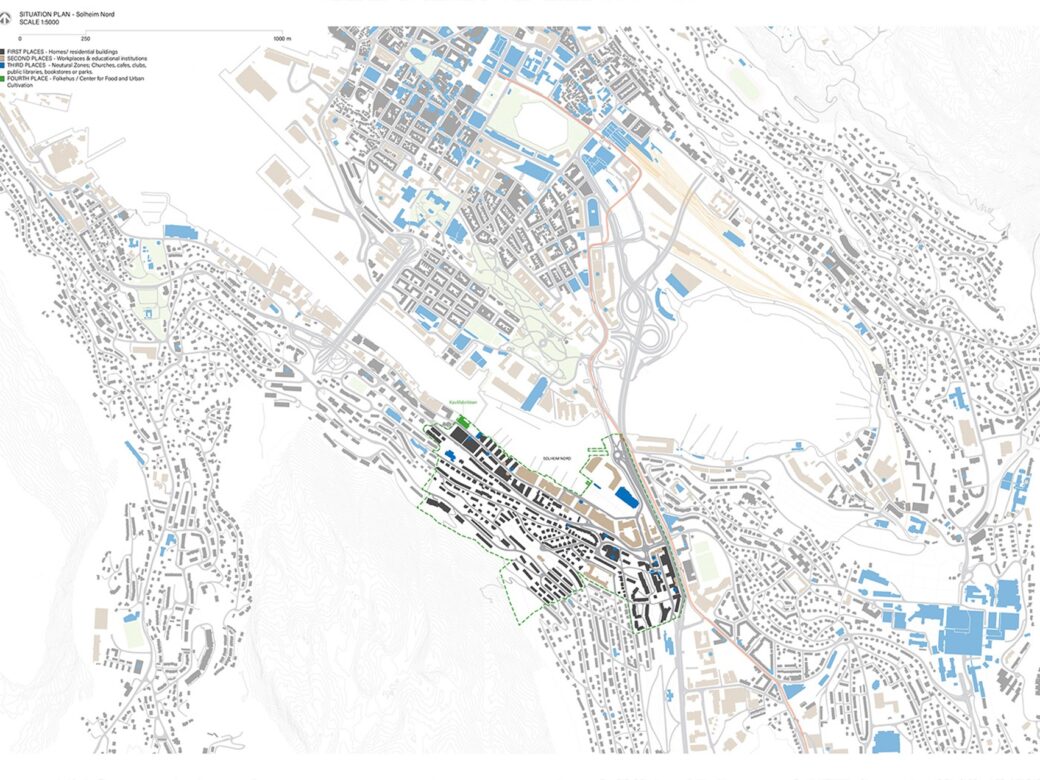 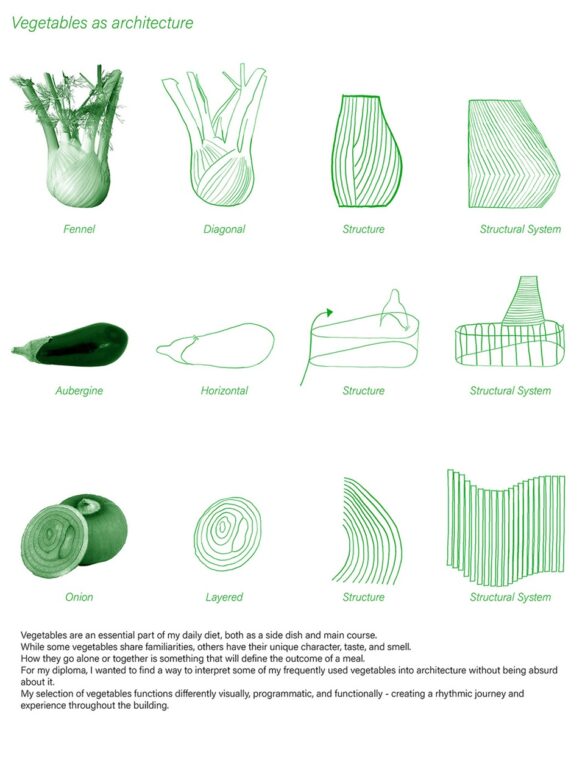 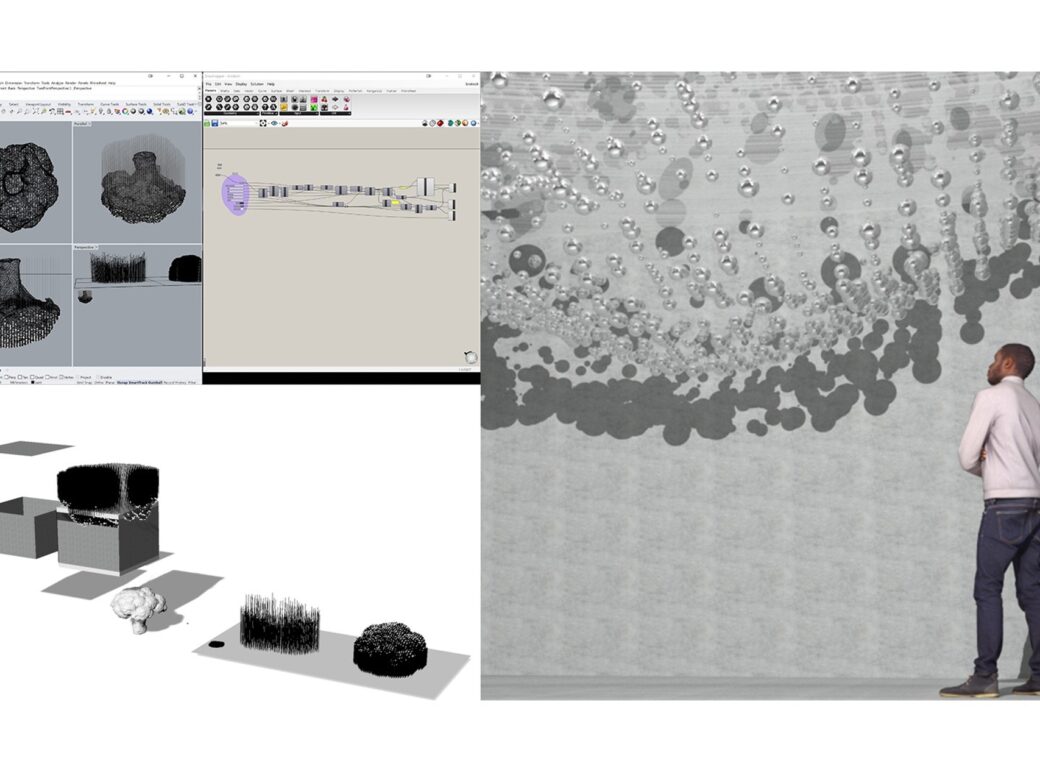 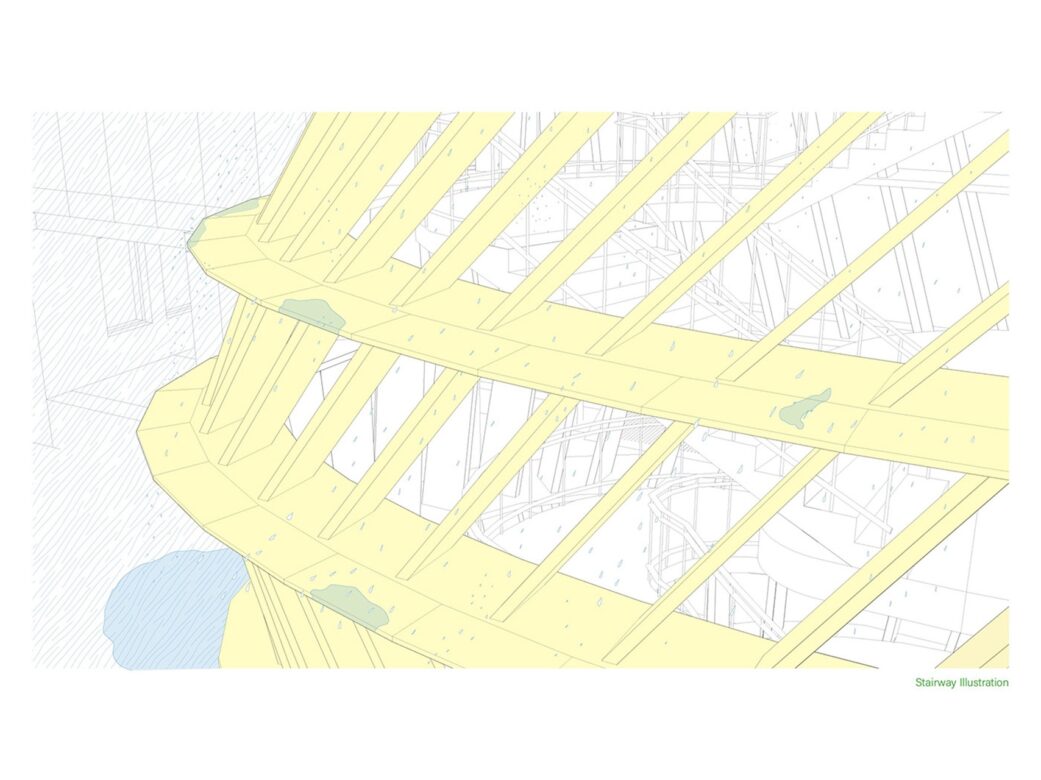 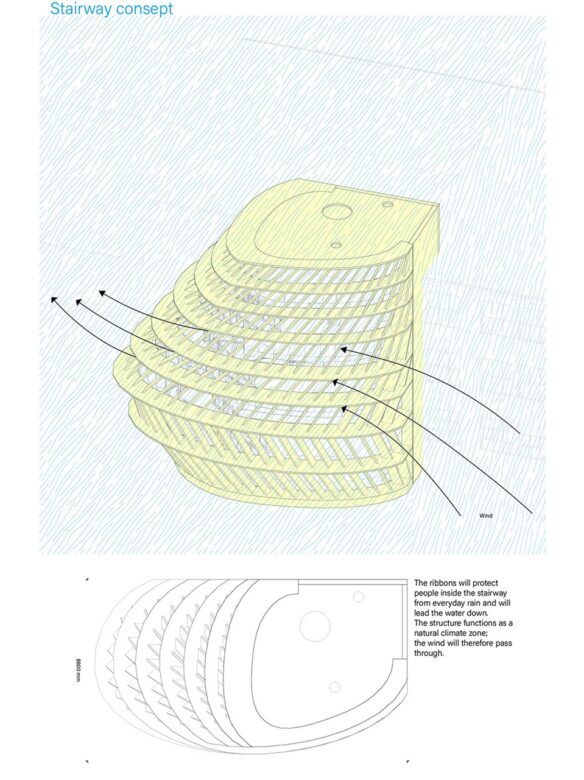 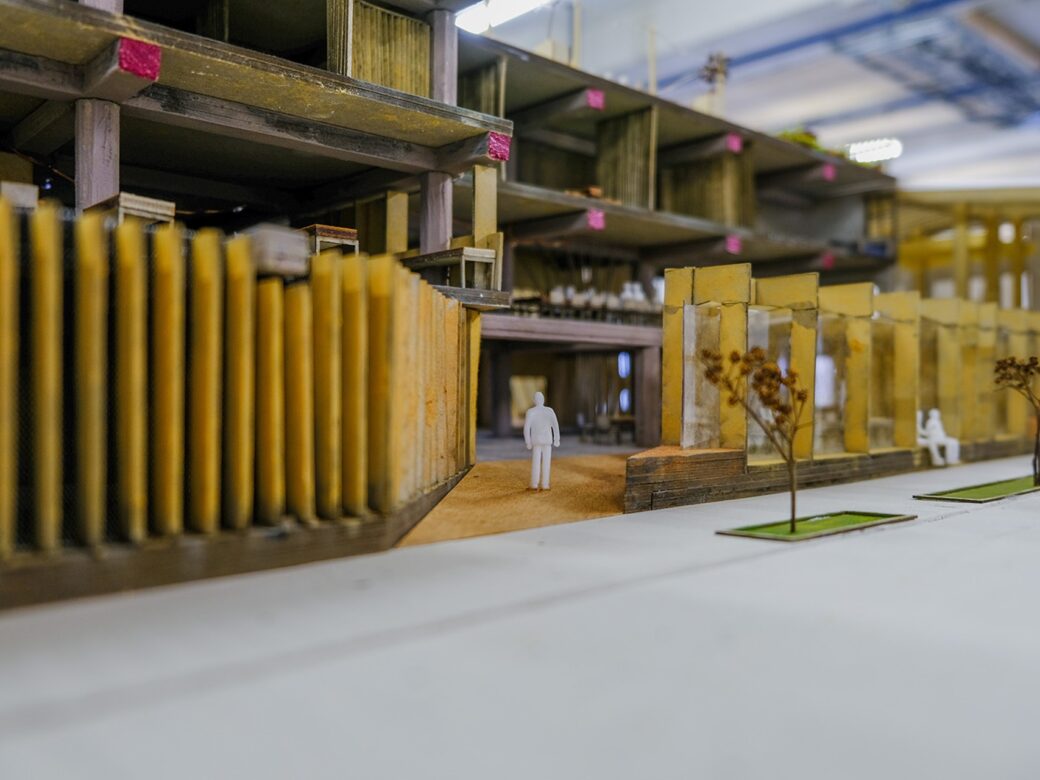 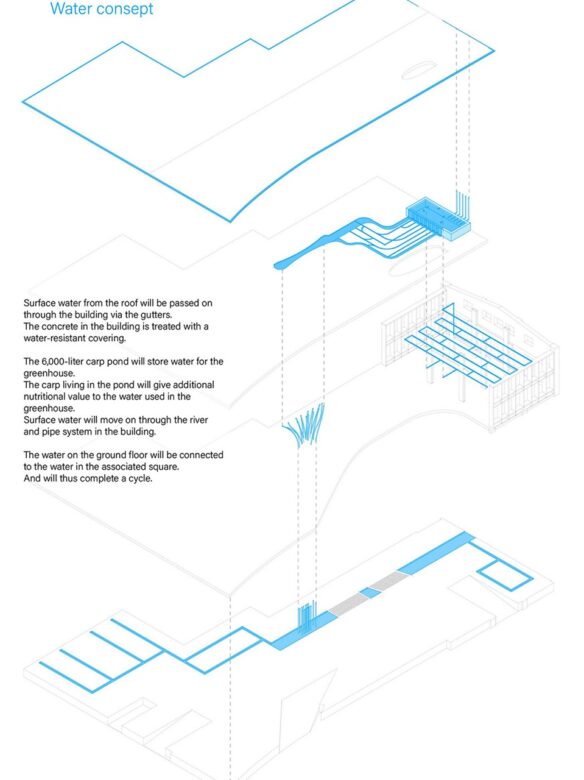 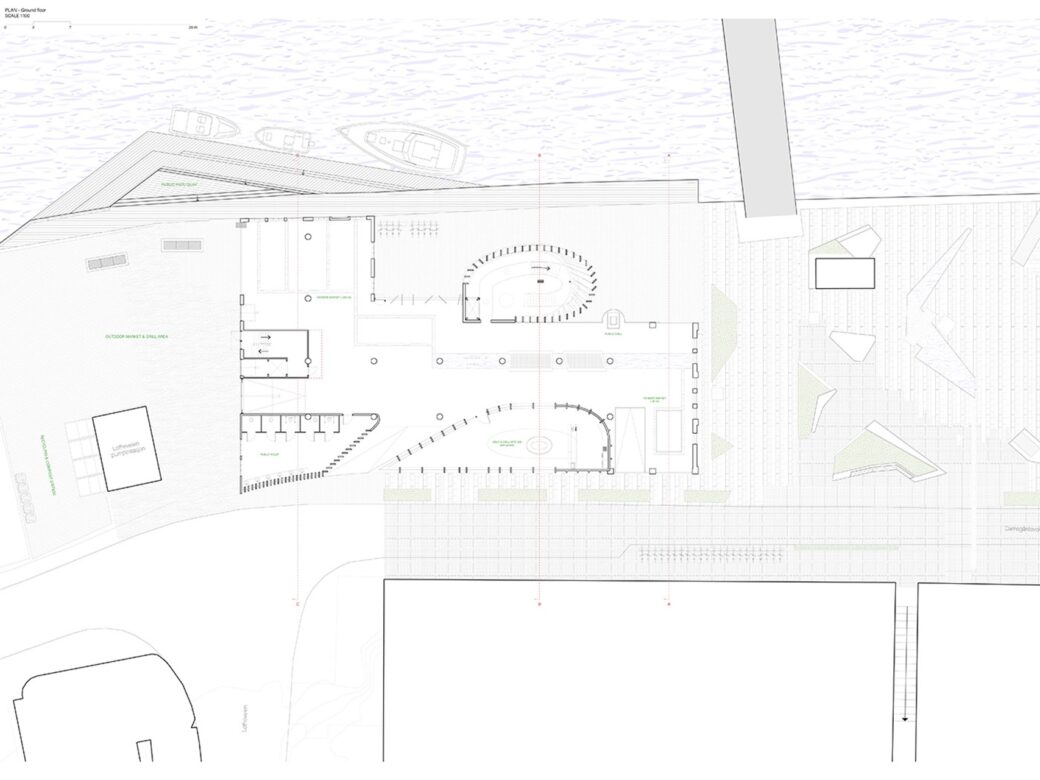 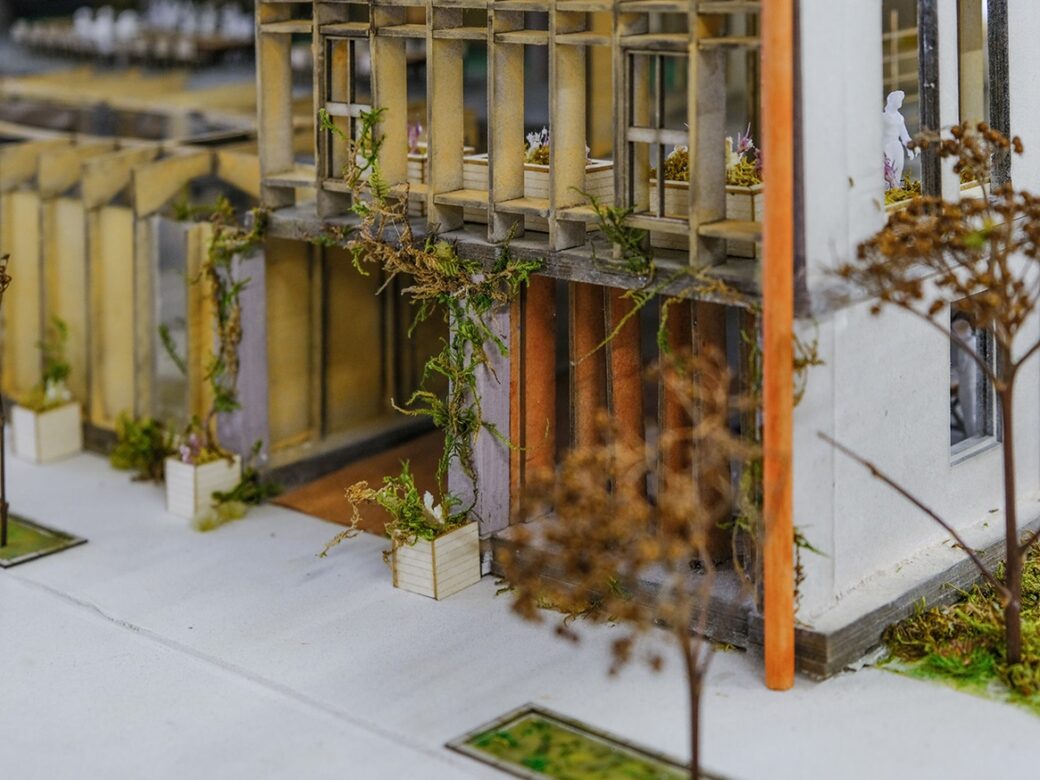