Rethinking spaces that are not meant to become places.
1 200 000*60 000*26 800 is aggregated to 0-4/0-16/0-32/5-8/8-11/11-16/16-32/31,5-63/20-120.
Clearing, cutting, pieces, ruin. A place is fragmented, mass is removed, space is created. A consume of stones from a mountain. A system created for profit.
Between mountain-bed pockets connected with a fjord; a small village called Vikaneset is located 50 min by car north of Bergen. This place has been transformed from an agricultural landscape, to become part of a global infrastructure. Since the 70s it has been the home for the quarry activity, at Husafjellet.
My project aims to understand the presence of a mountain in the different layers it is presented; in a system, with the locals, its future and as a material. This is a project of wander and wonder.
Question about power relations, and loss of identity on a local and regional scale is given attention while I search

In the geological proposed epoch; the Anthropocene1 there rises a question of how to be more sustainable in the way we live and develop. The UN goal number 9, 11 and 12 marks a starting point and the word »arealnøytral2» or area-neutral becomes important terms of our cultivation of land. This highlights the question of how can resources be transformed to remain useful?
How can I contribute in repurposing a space that has no future purpose?
The chosen place for this project is between six tunnels, high mountains, and deep fjords, located in Alver Municipality called Vikaneset. You pass this place at 80 km/h and it takes you about four minutes, you find it along E39 north of Bergen, as an anonymous place and a route for passing through.
What you do not see is the huge quarry on top of the mountain, since 1971 there has been a crushing plant here, Husafjellet is the mountain, decreasing every day, by 2073 Husafjellet will be spread all over Northen Europe and western Norway.
Development of cities depends on places like Vikaneset, where the traces of what happens somewhere else is left as excavation and subtraction. This expansion may not happen in Norway, quarries like the one in Eikefet, Vikaneset, export the mountain to Germany, Lithuania, Poland, Latvia and contribute to industries, such as oil and gas and now the growing windmill parks. External powers profit from something the people living here only experience as a decreasing mountain. The locality is transformed in this huge export of a place. Local materials give a place its identity. This is now lost in Vikaneset with the subtracted mountain. What happens when a place loses its identity?
Places like Vikaneset become traces of subtracted activity when the activity is over. How can a quarry to be used after its ‘’date of death’’ and become part of this community and contribute with its presence? How can the power of the locality contribute to the growth of this place?
The question of how we should live is a constant reminder of how we develop. And the way we live has no answer, nor enough questions. This project aims to honour the stone and explore possibilities for two futures in Vikaneset. I am investigating if and how we can use spaces that are not meant to be developed after their planned purpose to continue to have a purpose, and the impact this means to its surroundings.
It is important for me to investigate all the scales, from the global situation to the stone in your hand and the place you are in with your body. I read about the phenomena of power, Hyperobject3, locality, sociopetal-space4 and parasitism5 in understanding the complexity of the forces behind development and consequences.
My inspiration is; the stone, the locals of Vikaneset and my childhood home Solund. My approach is through site visiting, photographing, going into dialogue with the locals and using grid-system to investigate, compare and comprehend the different scales of these places and their spaces. Also look at a place as a four-dimensional space, where time is an important gesture for developing and proposing my project.
Glossary
1 – The Anthropocene is a proposed geological epoch for the state that the earth can now be said to be in. The proposal to define a new epoch after the Holocene is based on extensive changes in the earth’s surface due to human activity, especially in the time after the industrial revolution. (Wikipedia)
2 – ‘’Arealnøytral’’ ‘-If we are to stop the loss of biodiversity, Norway must become area-neutral. This means that we must reuse and densify already developed areas rather than developing of nature, and stop land consumption.’’ (https://www.sabima.no/et-arealnoytralt-norge/)
3 – Hyperobjects- In the Ecological Thought, Morton employed the term Hyperobjects to describe objects that are so massively distributed in time and space as to transcend spatiotemporal specificity, such as global warming, Styrofoam, and radioactive plutonium.
4 – describing environmental conditions that promote social interaction, such as circular seating arrangements and a comfortable ambient room temperature. A physical environment with these characteristics is termed a sociopetal space (Edward T. Hall.
5 – parasitism, relationship between two species of plants or animals in which one benefits at the expense of the other, sometimes without killing the host organism.
UN-goal:
9 – Build resilient infrastructure, promote inclusive and sustainable industrialization and foster innovation. (https://sdgs.un.org/goals/goal09)
11 – Make cities and human settlements inclusive, safe, resilient, and sustainable. (https://sdgs.un.org/goals/goal11)
12 – Ensure sustainable consumption and production patterns. (https://sdgs.un.org/goals/ 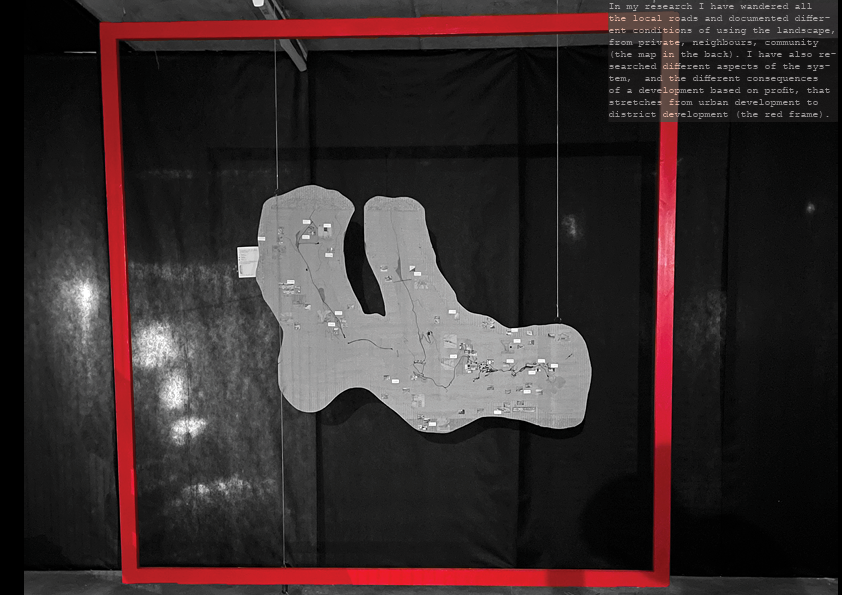 Short introduction to research and method, and appearance of power-relations between two opposite landscapes 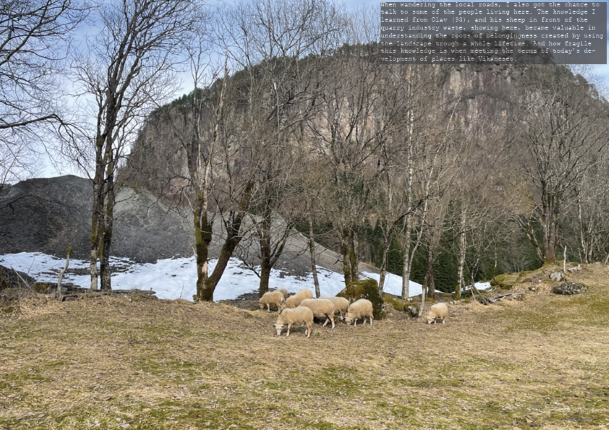 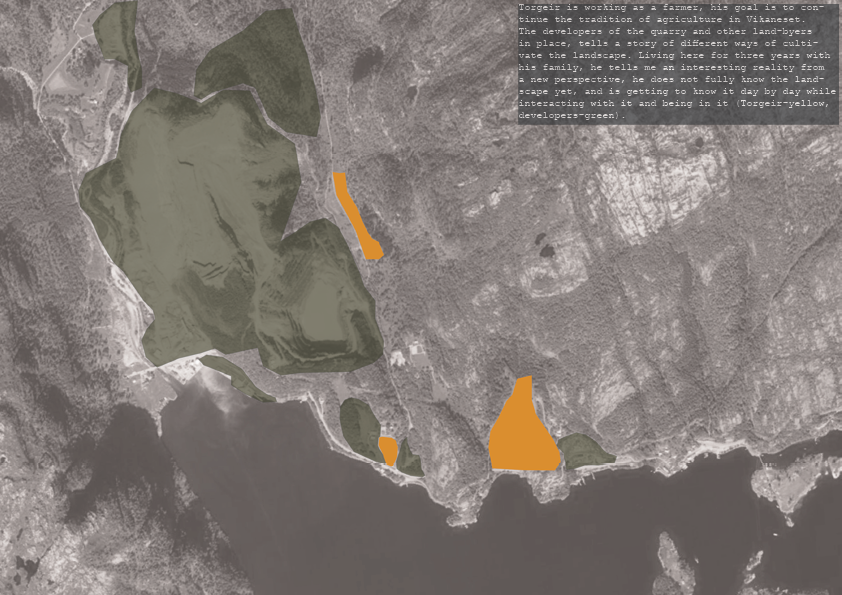 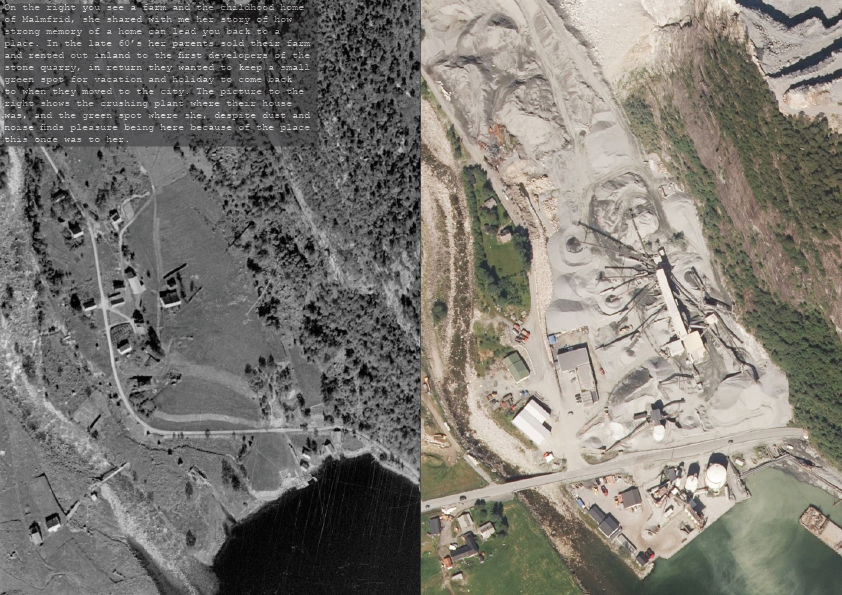 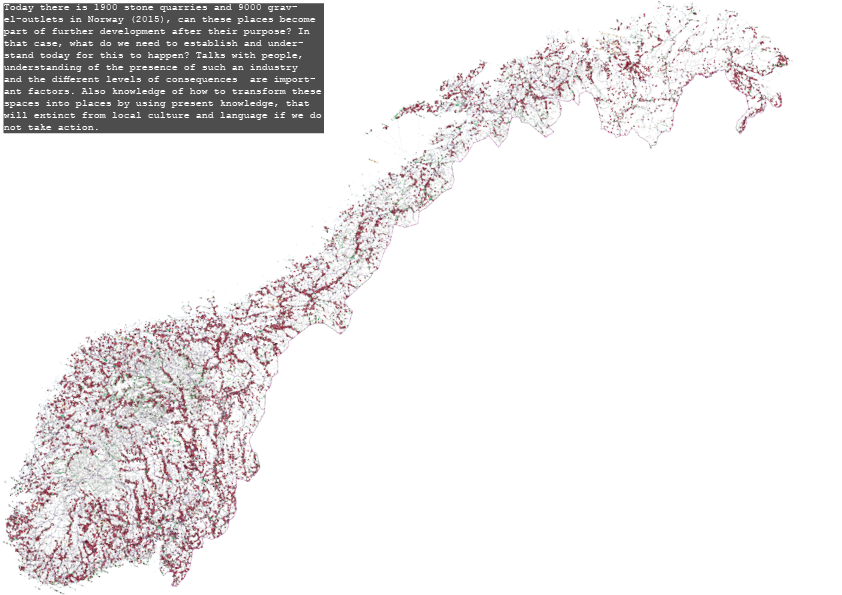 Map of stone quarries in Norway 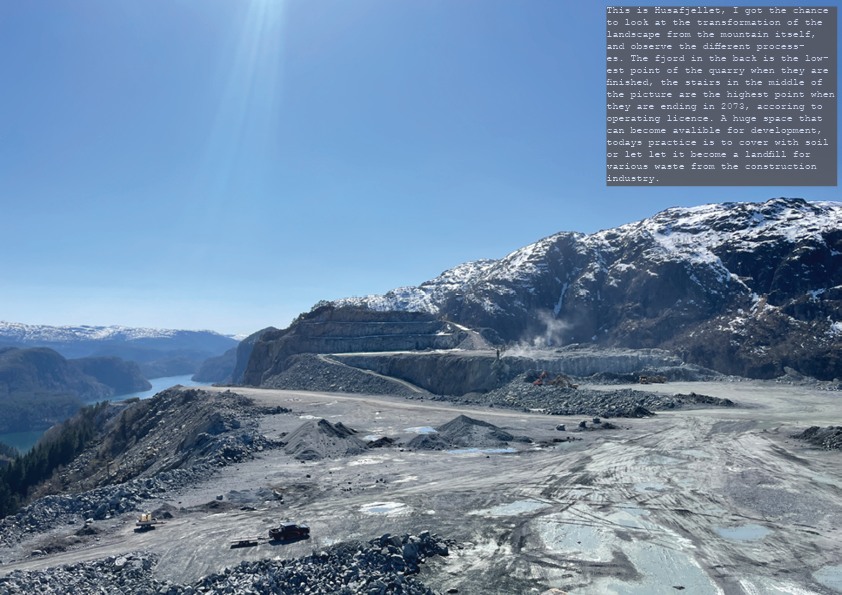 Picture from today's top of Husafjellet 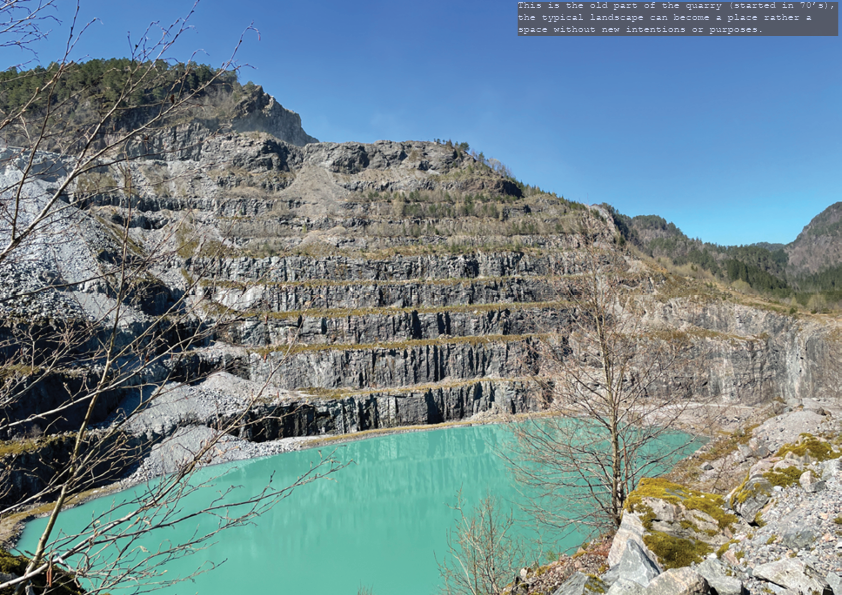 Picture of old part of stone quarry, south side of Husafjellet 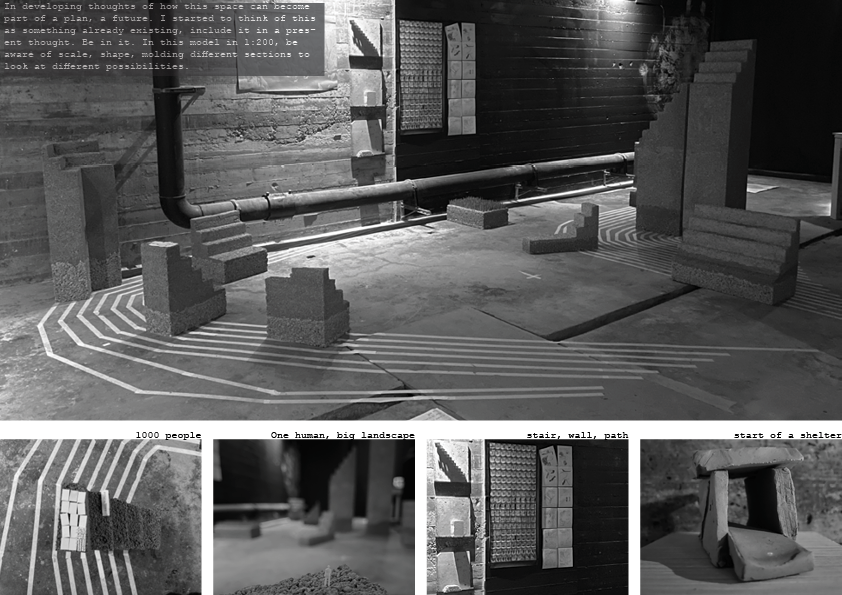 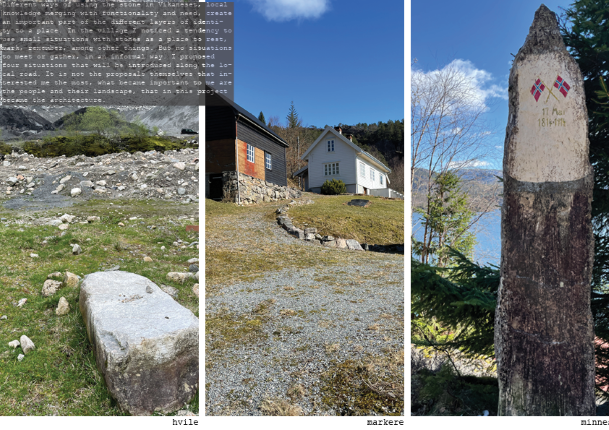 Research pictures from collection: ‘’different use of stone’’ 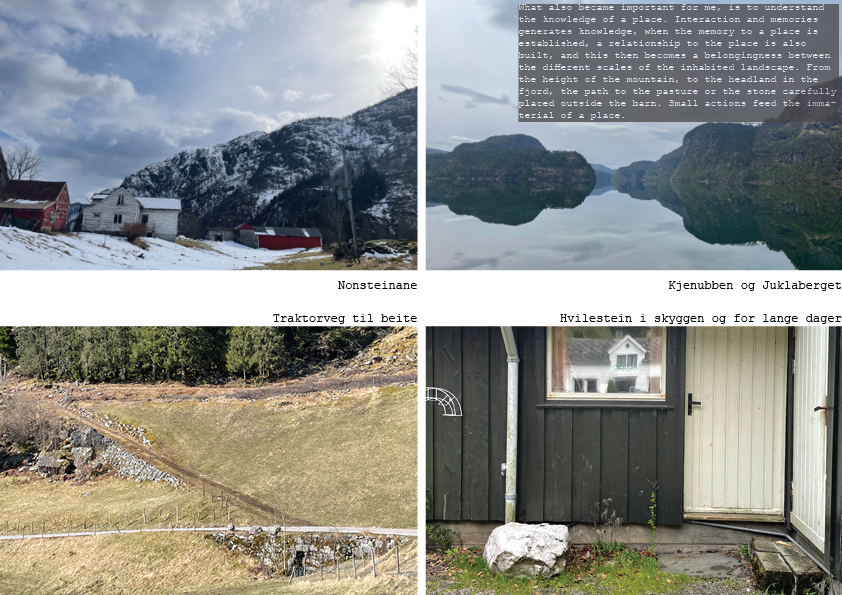 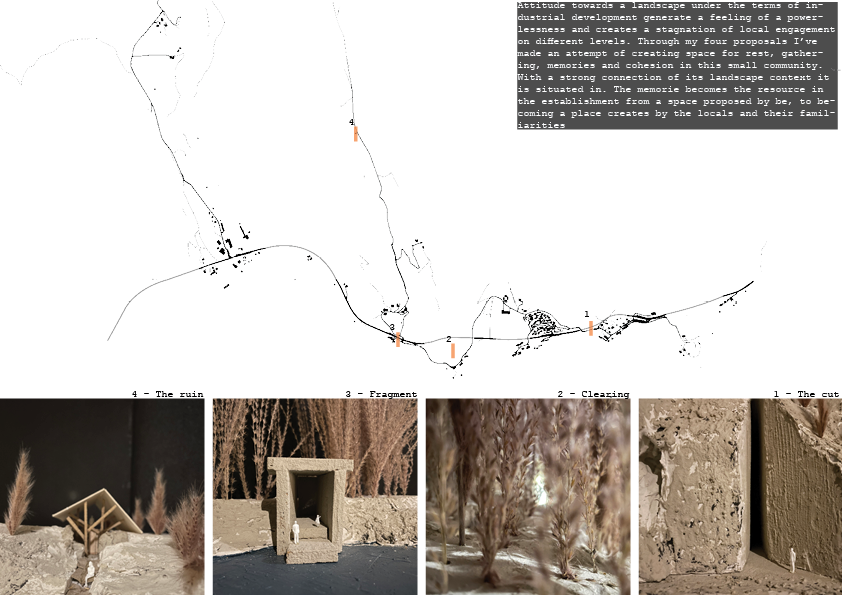 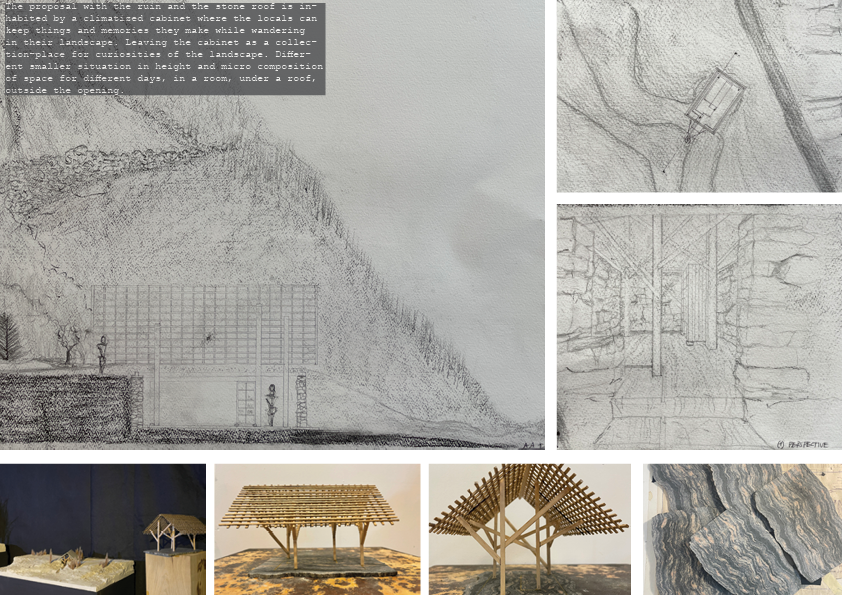 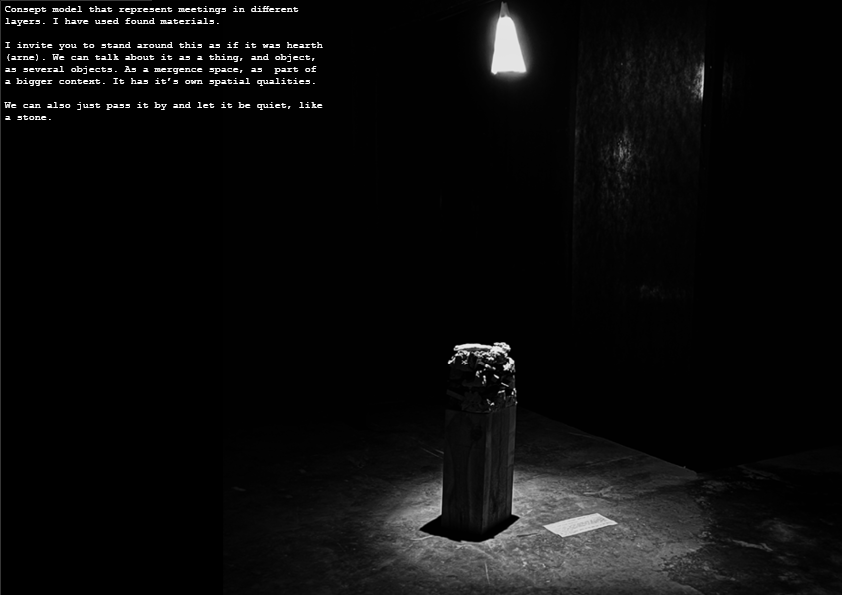 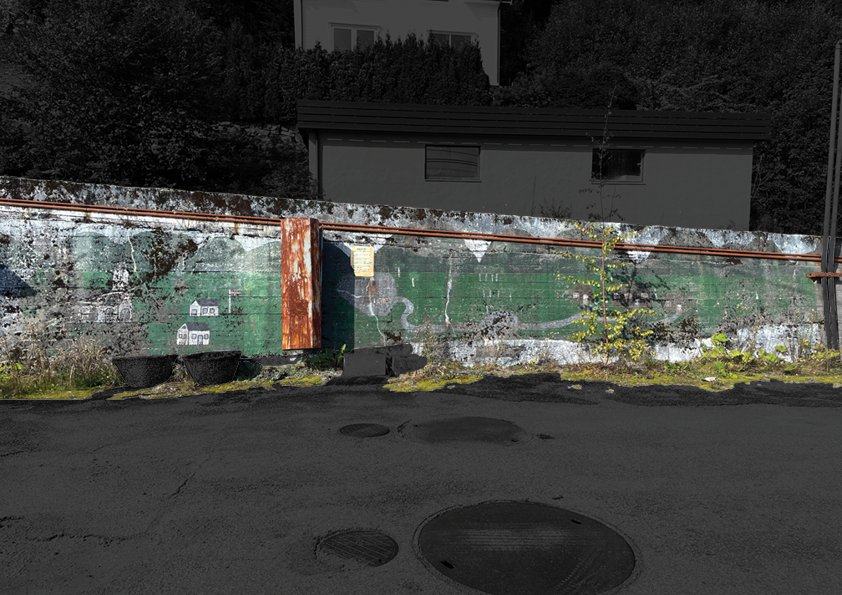 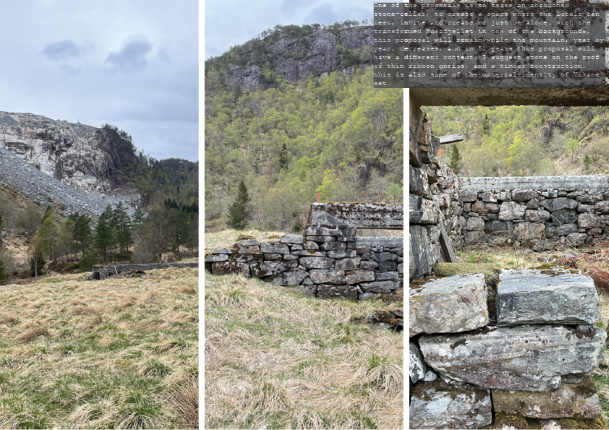 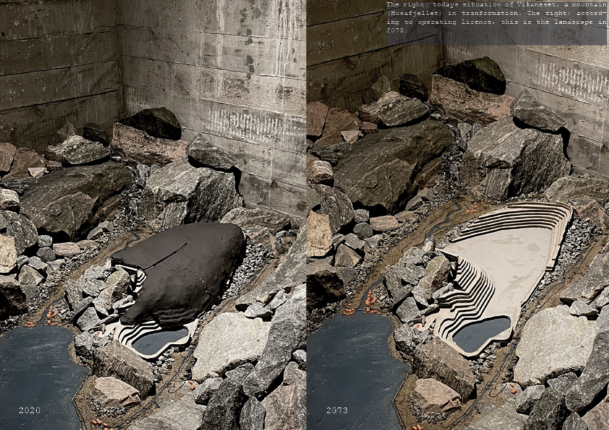